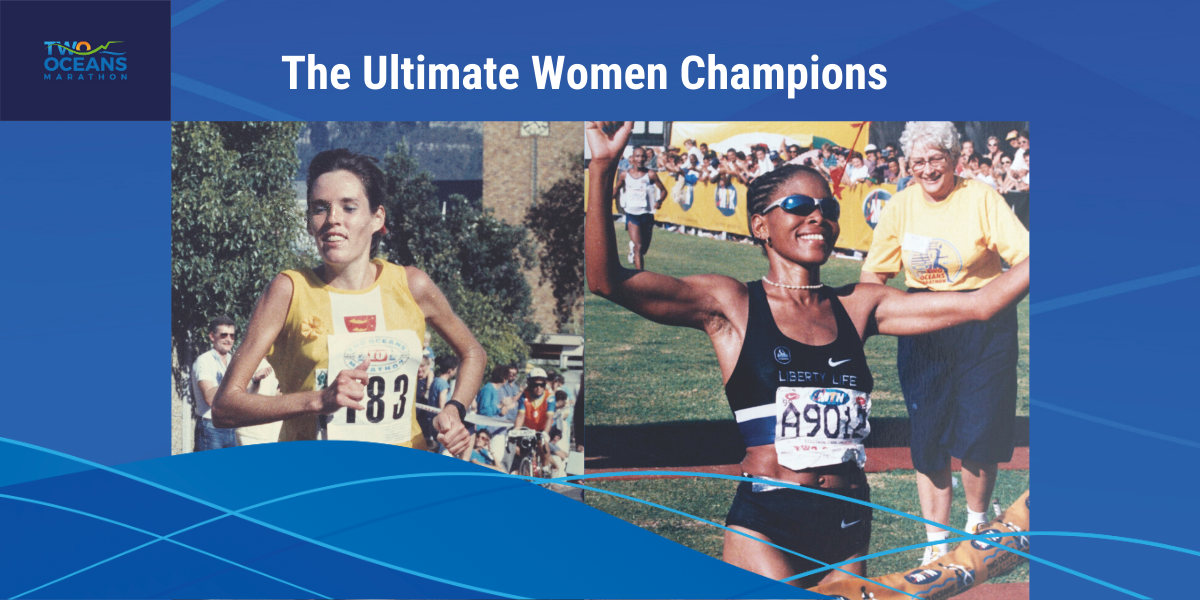 Over the course of half a century, there have been many unforgettable female performances in the 56km Ultra Marathon and 29 women winners. Hard as it is to pick ultimate highlights, these champions still stand out from the pack. 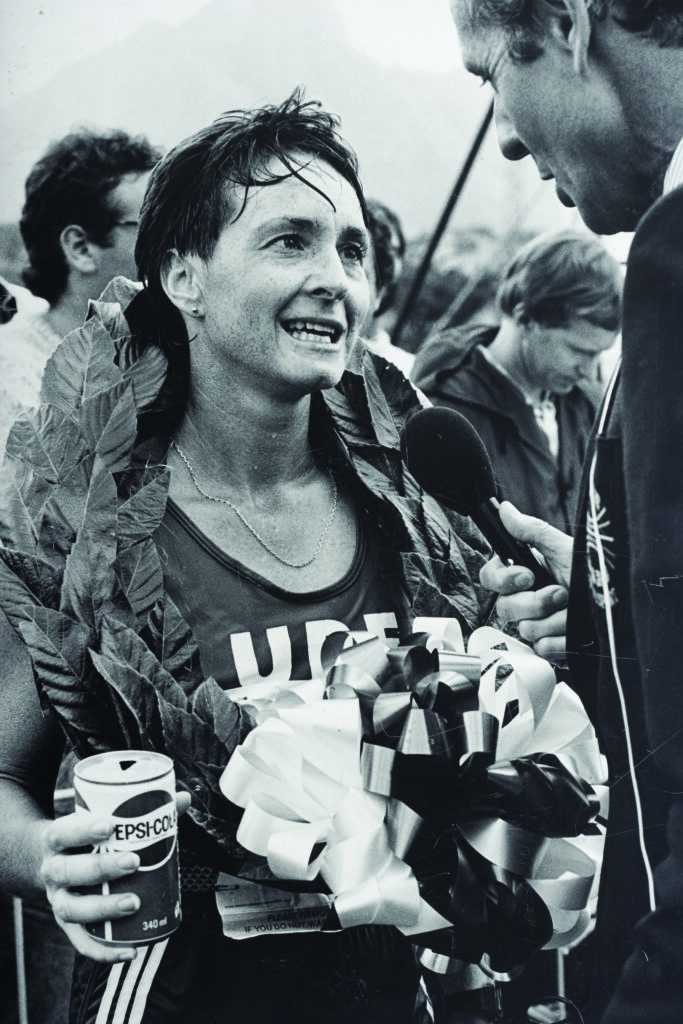 Her running career may have been cut short by illness and injury, but Monica Drögemöller packed an incredible number of wins, podium placings and records into an eight-year golden spell in the ’80s and ’90s. That included four wins in the Two Oceans Marathon, with her winning it every time she started the race, with this record of four wins finally equalled in 2012 only by Elena Nurgalieva. 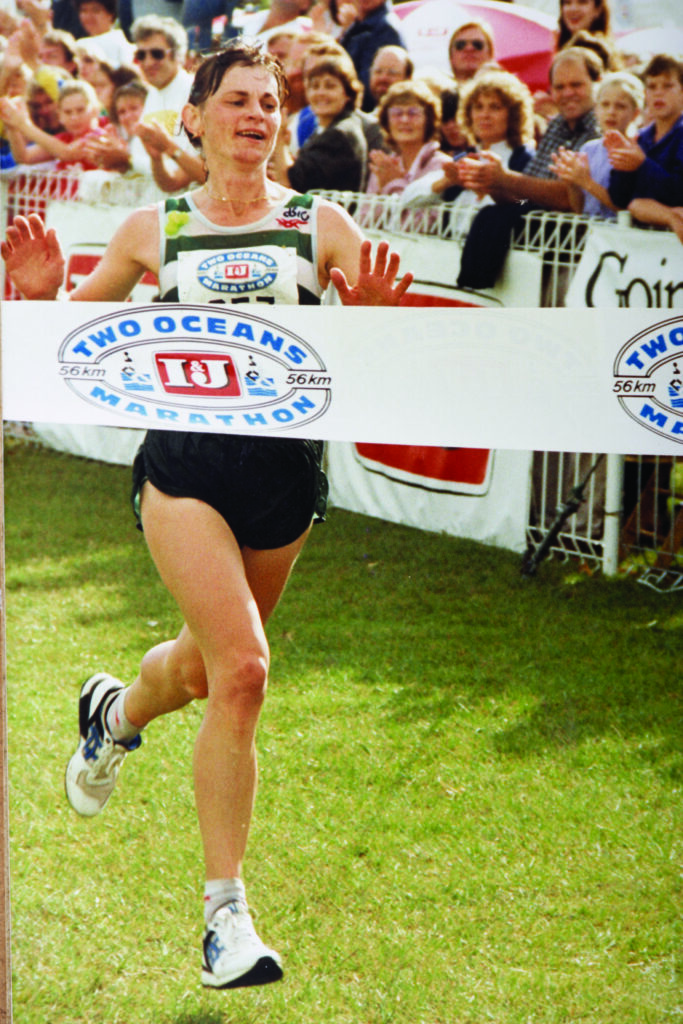 Drögemöller still holds a similar record for four wins in the Peninsula Marathon, where she clocked her marathon PB of 2:37:19 in 1990. She was rewarded for her efforts with Junior Springbok colours. Another record that she held for many years was her 1987 SA record of 1:53:01 for 30km – a feat only recently beaten when her record was broken in 2018.

Frith van der Merwe took the running world by storm in 1989. She began with a record-shattering 22nd place overall in the Two Oceans Marathon, finishing in a blistering time of 3:30:36 – a record that still stands today. 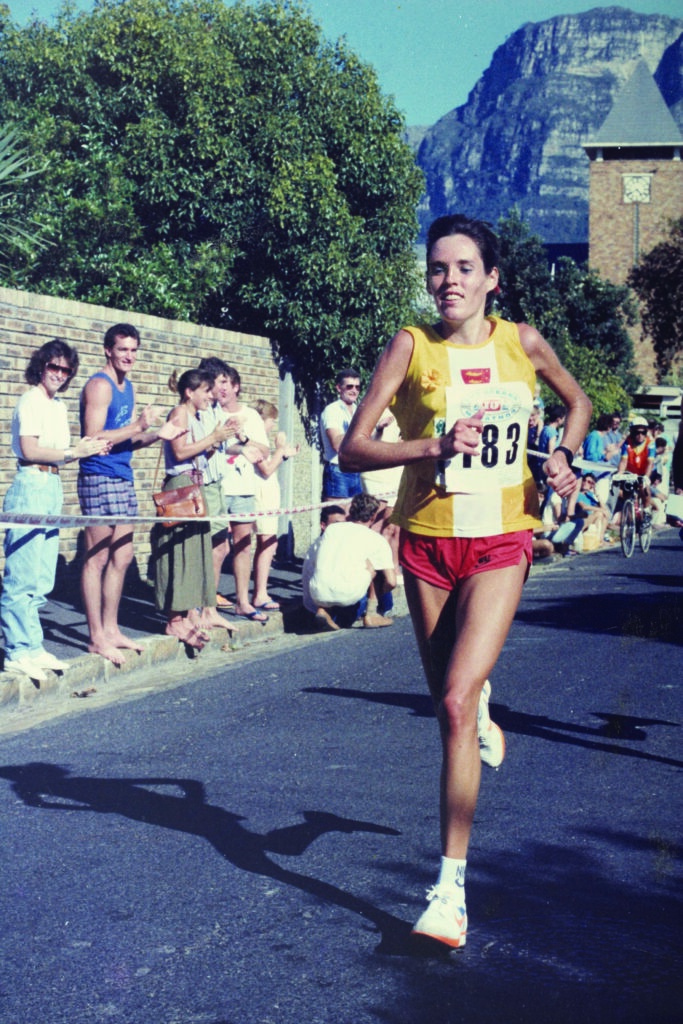 Frith then retained her women’s title at the Comrades Marathon by finishing an incredible 15th overall as she became the first woman to finish under six hours. Her 5:54:43 took almost an hour off the previous women’s record!

Van der Merwe won the South African Marathon title twice, set two national records at that distance, and finished seventh in the 1993 World Championship Marathon. Unfortunately, she experienced injury problems after 1993, and then lost her husband to cancer, but eventually returned to running, completing the Two Oceans Marathon again in 1997 and 1999.

Arguably, she is the greatest ultra athlete South Africa has ever produced. 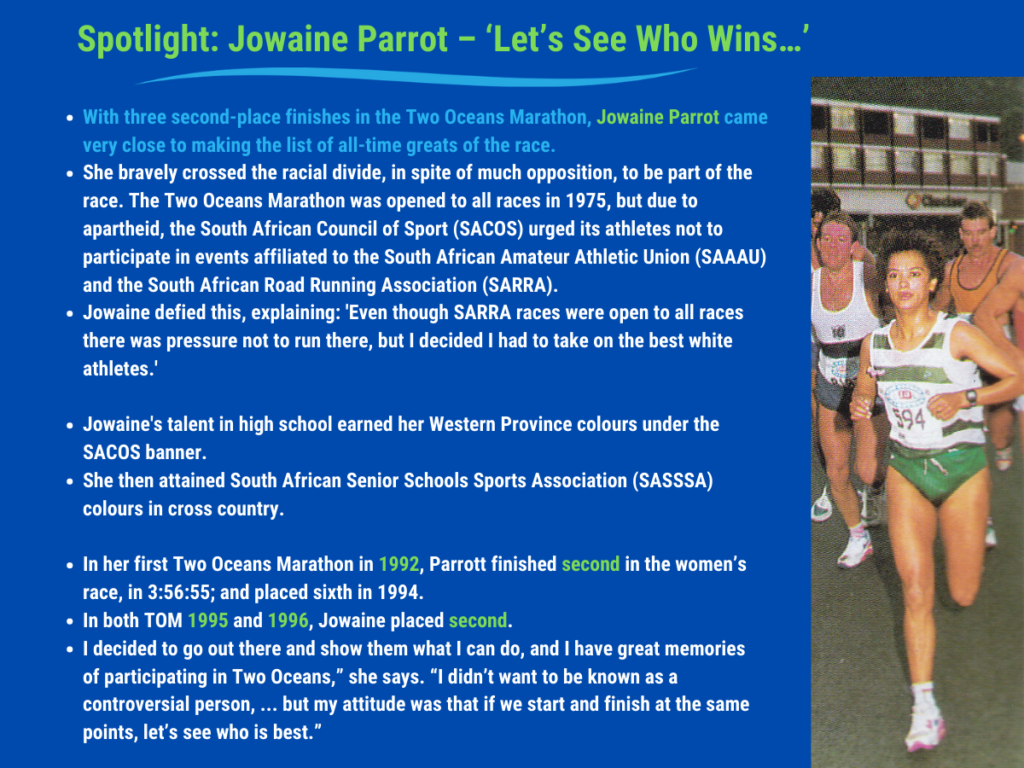 The late Angelina Sephooa of Lesotho was one of Africa’s best female ultra-marathon runners, often using tactical acumen to defeat supposedly faster runners, and becoming just the second of two women ever to achieve three consecutive wins in the Two Oceans Marathon. 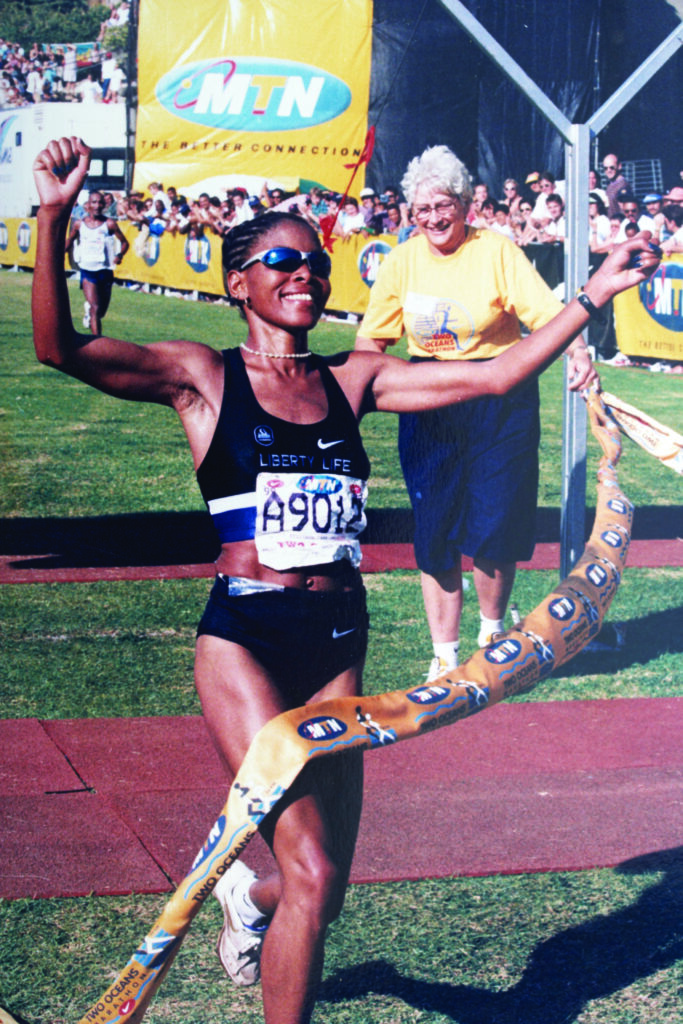 Sephooa won the Soweto Marathon in 1998, posted her marathon PB of 2:40:45 in 1999, and finished 11th in the 2002 Commonwealth Games Marathon. In 2003 she returned to the Two Oceans Marathon and finished seventh, along with second places in the Soweto Marathon and City to City 50km in 2003, as well as a third place finish in the Stockholm Marathon in Sweden. In 2004 she placed sixth in the Two Oceans Marathon, but later that year began experiencing mysterious chest pains. Sadly, she died suddenly in January 2006.

The one-two finish by twins Elena and Olesya Nurgalieva in the 2004 Two Oceans Marathon was a repeat of the 2003 Comrades Marathon result, their first two races in South Africa, which launched a period of dominance the likes of which South African road running had never seen before. Often working in tandem to wear down opponents, they were seemingly unbeatable for many years. 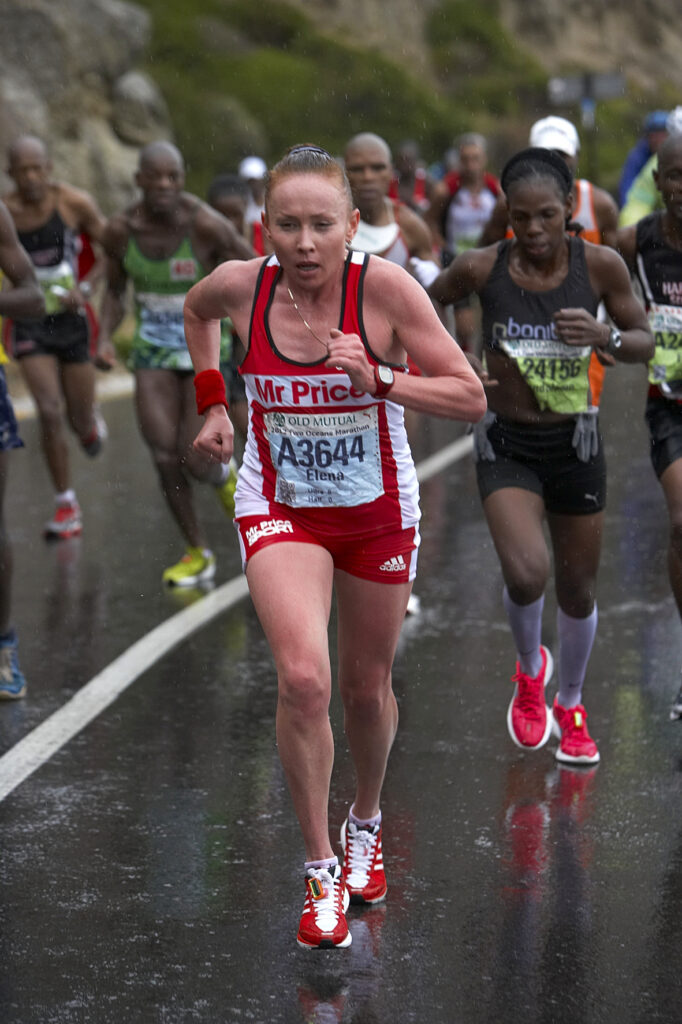 Olesya, on the other hand, claimed three wins at Two Oceans and two at Comrades. Elana was also either runner-up or third a combined 12 times across the two races, while Olesya (below) added a further 10 podium positions of her own. 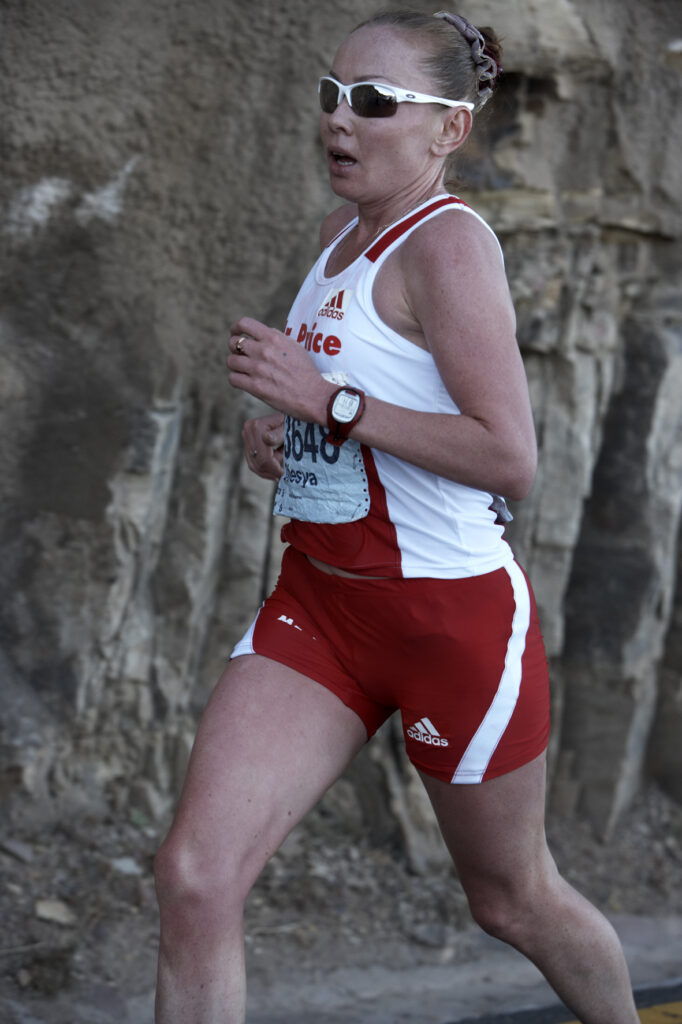 Having finished 89th in the 2013 Two Oceans Marathon, Caroline Wöstmann was given only an outside chance of a gold medal in the 2015 race – and that was thanks to her sixth place finish in the 2014 Comrades Marathon. However, she proved the pundits wrong with a winning performance, and then surprised them yet again by winning the Comrades Marathon that same year. 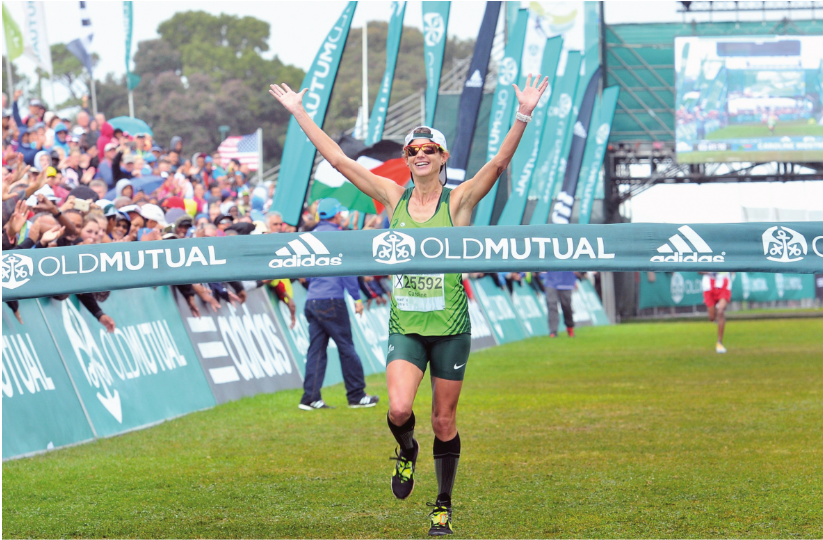 The following year, in 2016, she returned to the Two Oceans Marathon with instructions from her coach not to race too hard, given that Easter was late in the year, meaning that the Two Oceans Marathon was much closer to the Comrades Marathon. But, realising she was within striking distance of race leader Tanith Maxwell, she went for it, pulling off a second win. Wöstmann came close to repeating her ‘Double,’ but severe cramping saw her lose out to Charne Bosman at Comrades that year. 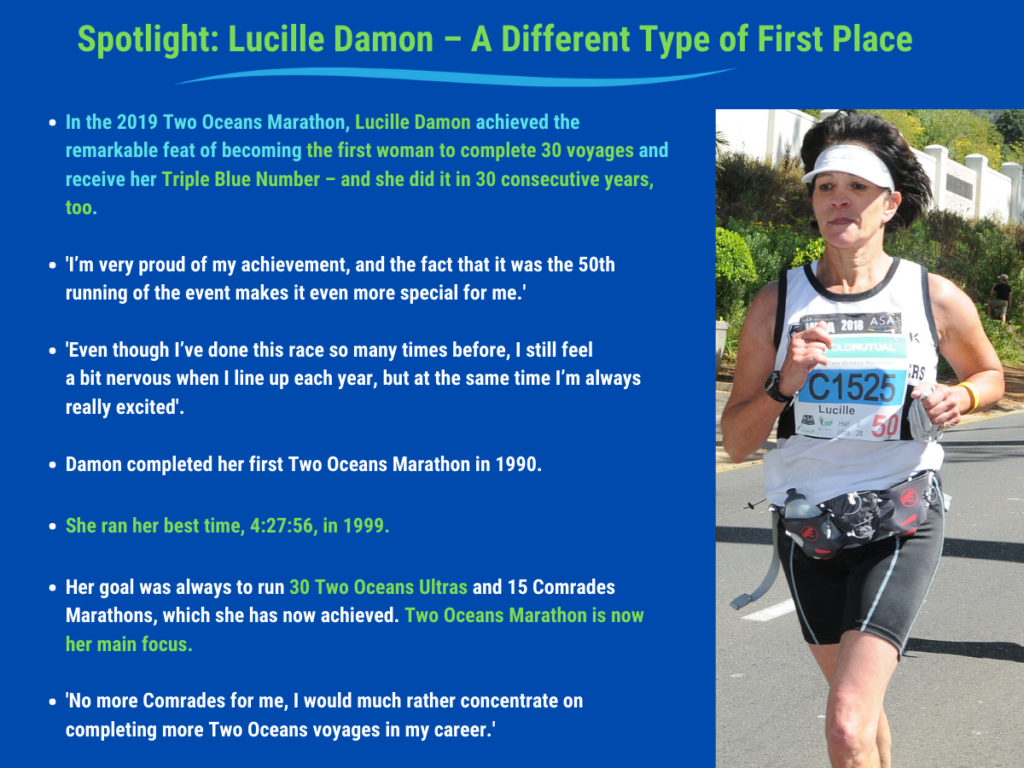 Gerda Steyn (2018, 2019) – TOM course record beckons after two remarkable wins
Gerda Steyn is widely expected to finally break the now 31-year-old women’s record at Two Oceans in the near future, after her scintillating win in the 2019 race. She easily retained her title in 3:31:29, finishing just 53 seconds off Frith van der Merwe’s long-standing 1989 course record. Remarkably, this was in spite of having to run the longer Ou Kaapse Weg course due to a last-minute Two Oceans Marathon route change, and slowing in the home straight to celebrate with fans. It would not be two months later that she’d go on to become the first woman to dip under six hours in the Comrades Marathon Up Run. 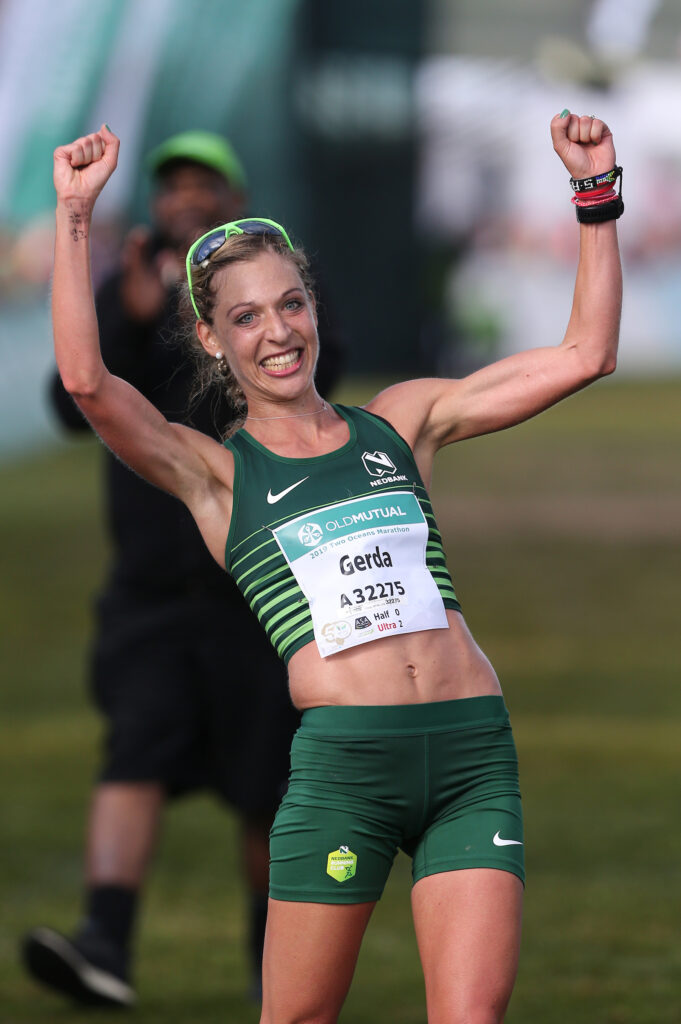 Having moved to Dubai in 2014 for work, Steyn, a trained quantity surveyor, joined a running group to make friends and stay healthy. The group included a number of South Africans who were training for the Comrades Marathon. Seven months later, she ran her first Comrades. Having discovered she had a real talent for running, she began training seriously, and in 2016 she finished 14th in both the Two Oceans and Comrades Marathons. In 2017, her performance growth became crystal clear as she improved to finish in an impressive fourth place at Comrades in 2017.

Her real breakthrough came in 2018, when she won the Two Oceans Marathon. She’d also go on to finish second at Comrades. Her best year to date was 2019 – the always smiling Gerda finished pulled off a remarkable ‘Double’, taking both the Two Oceans and Comrades titles in inimitable style.

The TOM 50th Anniversary Book, Celebrating 50 Years of the Two Oceans Marathon is currently available in Exclusive Books and is being delivered via Uber Eats. You will also earn Fanatics Points from Exclusive Books for your purchase. You can also purchase the book from takealot.com and Loot as well as publisher.co.za.

Good news for overseas readers who have been asking, the book will be available on Books Direct as from 15 May, 2020.