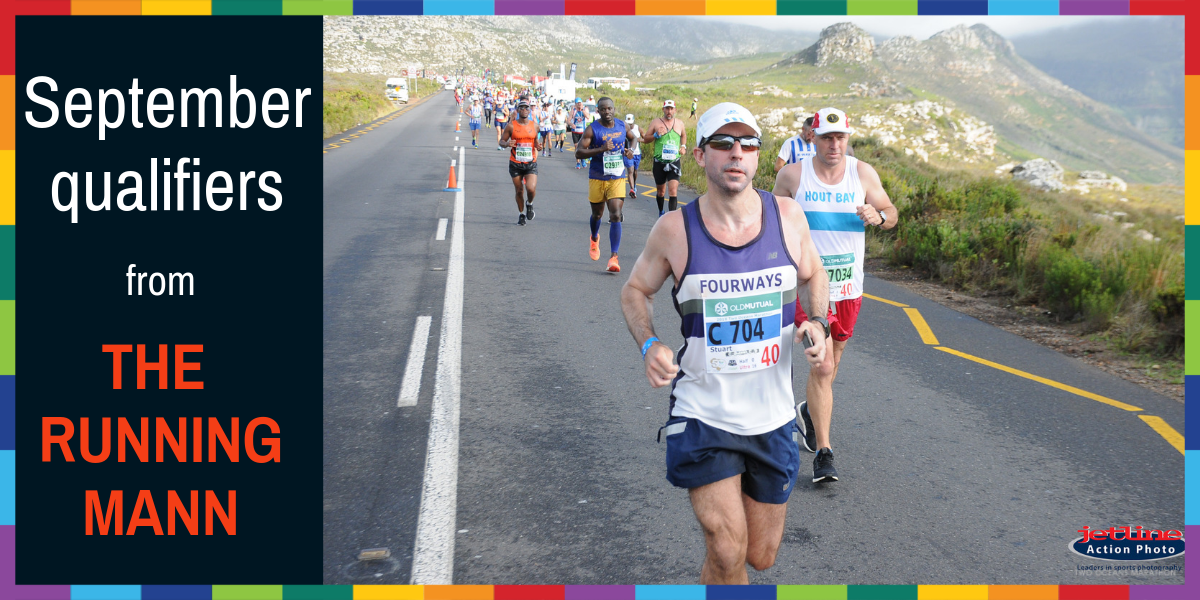 Your September qualifiers for TOM 2020 – the Running Mann’s guide

September heralds spring here in the southern hemisphere with longer days, warmer temperatures and fewer excuses to avoid going for a run. Although it’s still slim pickings for those wanting to work off some of the winter fat, all six standard marathons and the one ultra on offer are quality choices.

The Western and Eastern Cape dominate your September options with five of their athletics districts hosting a stunner of a race and Gauteng and KwaZulu-Natal filling the remaining two places.

The marathon is an excellent companion race to the Two Oceans Marathon, offering the opportunity to explore another side of the Mother City. In fact, you cross the Two Oceans start line as you head down Main Road but there are only a few hundred metres of route duplication before you turn into Campground Road, run past the hallowed turf of Newlands Cricket Ground and then do a quick detour around Rondebosch Common (getting a chance to appreciate some critically endangered biodiversity as you loop around one of the last surviving pockets of Cape Flats Sand Fynbos) before you head back towards the city centre.

The race starts at one of Cape Town’s most popular tourist attractions, the V&A Waterfront, where 10 000 runners are released onto the Atlantic Seaboard. The early morning nerves are calmed by the cool sea breeze while exuberant runners’ chit-chat harmonises with the beat of the Sea Point Promenade waves. From there it’s into the city, where a cosmopolitan mix of modern skyscrapers and iconic historical landmarks like the Mount Nelson Hotel, South African National Gallery, South African Holocaust Museum, St Mary’s Cathedral, Houses of Parliament, City Gardens, City Hall, District Six and the Castle of Good Hope provide a visual extravaganza while Signal Hill surveys your progress.

Then it’s straight down Main Road, past Groote Schuur Hospital, where Dr. Chris Barnard performed the world’s first human to human heart transplant, and into the southern suburbs, where you can say ‘Hello’ to the Two Oceans start line at the Dean Street intersection.

This area is home to many top academic and sporting schools – and the route passes several of them including, in my opinion, the finest boys’ school in the country, Rondebosch Boys’ High School, who are the only school to host a support table at the Two Oceans Marathon, and have done so for over 30 years.

On tired legs, it’s good to know that the incredible panorama of Table Mountain, one of the seven natural wonders of the world, provides the backdrop for your journey home as the noise, support and entertainment steadily increases all the way back to the finish line at Green Point Stadium.

If seven days without a marathon makes you weak, you have to feel for the poor Gauteng runners who had a marathon break of four months until Vanderbijlpark’s Vaal River Marathon and Tony Viljoen Masters Marathon, both on 1 September.

Eastern Province Athletics offers you the Friendly City Marathon in Port Elizabeth on 7 September. This is a friends-with-some-hilly-benefits out-and-back route with plenty of beautiful ocean views along the way. Port Elizabeth is indeed the ‘Friendly City’ – run the marathon and put their hospitality to the test. Just hope that you don’t get to experience their other moniker – the ‘Windy City’ – on race day!

In the Transkei, the Elliot Madeira Marathon on 8 September provides some scenic countryside running before finishing in the buzzing town of Mthatha. For those who want to run a marathon in all 17 athletics provinces, this is one of only two standard marathons in the Transkei. Look out for former international rugby referee, Jonathan Kaplan (Two Oceans Ultra Blue Number 5627), at this year’s race where he is hoping to become the second person to complete the full set of marathons run in every South African athletics province.

The Amajuba Marathon (22 September) in Newcastle, KwaZulu-Natal provides a good central option for those in need of a well-organised long run. After starting with a 10km in 2017 and adding a half marathon in 2018, Newcastle City AC have added a marathon to the menu in 2019. The mostly flat double-lap route is broken up by two major hills.

There is just one ultra option in September but it’s a Cape classic: The Laingsburg Karoo 80k Ultra on 28 September. What could be better than ending the month with an awesome eighty kilometres of bliss in the heart of the Great Karoo? This is a one-of-a-kind race with 15km of tar and the rest on quiet gravel farm roads while you enjoy the peace, beauty and serenity of the Karoo Desert. The route starts at an altitude of 642m and slowly climbs to 922m at the 44km mark – the good news is that ‘it’s all downhill from there’. If you’re lucky, the natural phenomenon of the spring wild flowers will be in full bloom during your run.

Although there are just seven qualifying options in September for Africa’s biggest running event, it’s more than enough to put a spring in your step. See you on the road!

The Running Mann, real name Stuart Mann, has completed over 200 marathons and ultras, and is on a mission to run every marathon in South Africa! Every month, he rounds up your best options for qualifying for his favourite ultra, Two Oceans Marathon. This month he ran Tony Viljoen Masters and will be running Elliot Madeira, Sanlam Cape Town and Laingsburg Karoo. Follow his adventures as they unfold on Twitter, Instagram and Facebook