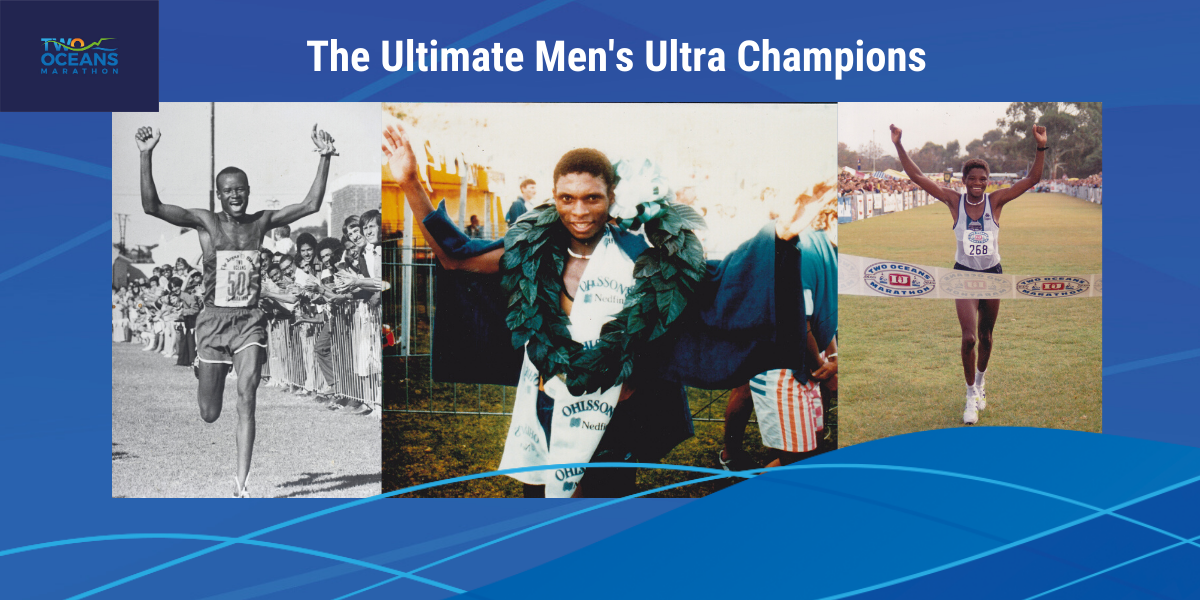 Since the inception of the race in 1970, 39 different men have run their way towards the coveted Two Oceans Men’s Ultra Marathon title. Hard as it is to pick, here are the champions that stand out as the ‘greatest’ in the history of the race so far

After the Two Oceans Marathon was opened to all races and women in 1975, it took just one more year for the first black winner to emerge in 1976. Hailing from Lesotho, Gabashane Vincent Rakabaele used his devastating speed to win a thrilling final sprint to beat Alan Robb by six seconds, after the two had run shoulder to shoulder following a successful break at the marathon mark.

Gabashane’s 3:18:05 winning time also broke the course record. In 1979, Rakabaele would go on to win the race again – this time smashing his own still-standing course record by nearly 10 minutes, setting a new course record of 3:08:56. 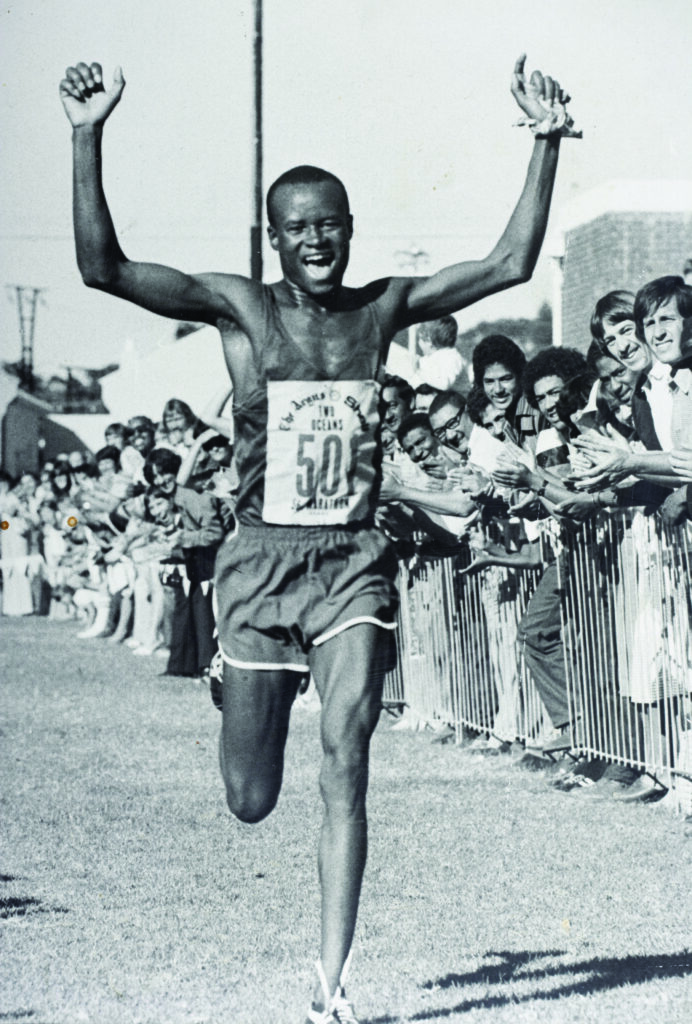 He eventually accumulated 12 Two Oceans Marathon medals, seven of them gold for a top 10 finish. In a glorious running career, Rakabaele also became the first black runner to officially finish the Comrades Marathon in 1975, and the first to earn a Comrades gold medal in 1976.

He also represented Lesotho in the marathon at two editions each of the Olympics and Commonwealth Games. Sadly, he died of unknown causes at the age of 55 in November 2003.

A master tactician when it came to the Two Oceans Marathon, Siphiwe Gqele would stay just behind the leaders until halfway, then begin his charge on Chapman’s Peak and use his climbing strength on Constantia Nek to go clear. He was the first three-time winner of the race, and remains the only man to win it three times in a row. 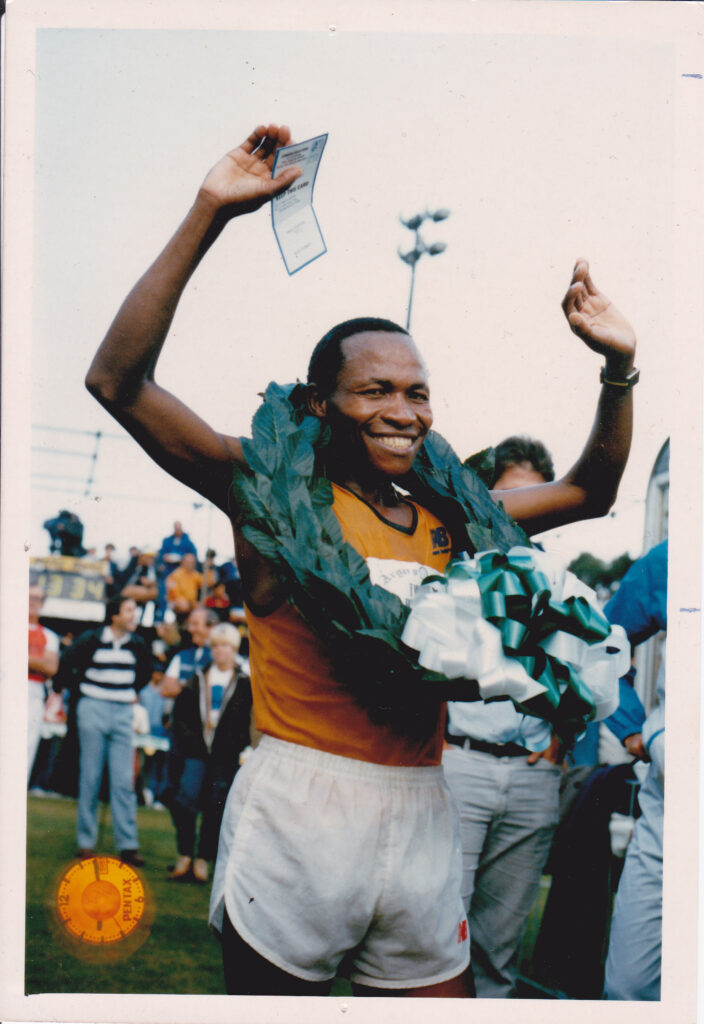 Gqele posted eight sub-2:20 times in his career, and also finished 10th in the Comrades Marathon in 1987.

Breaking the course record by six seconds in 1987 was just the start for Thompson Magawana at the Two Oceans Marathon. 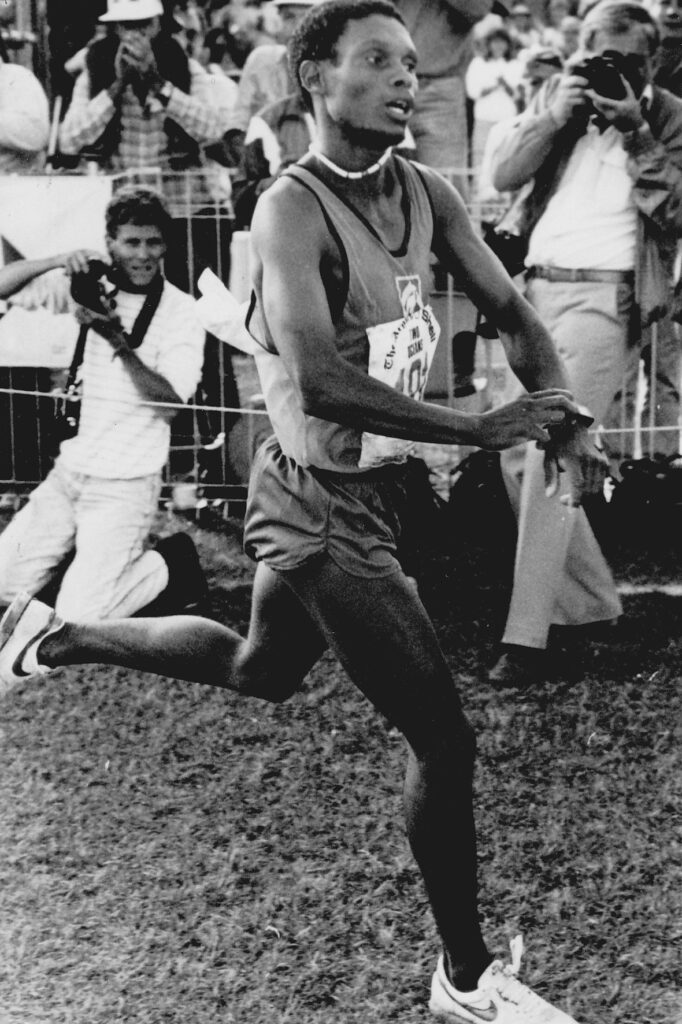 The following year he retained his title, shattered the course record, and recorded world bests along the way for 50km (improving the previous mark by over three minutes) and 30 miles (by over eight minutes). 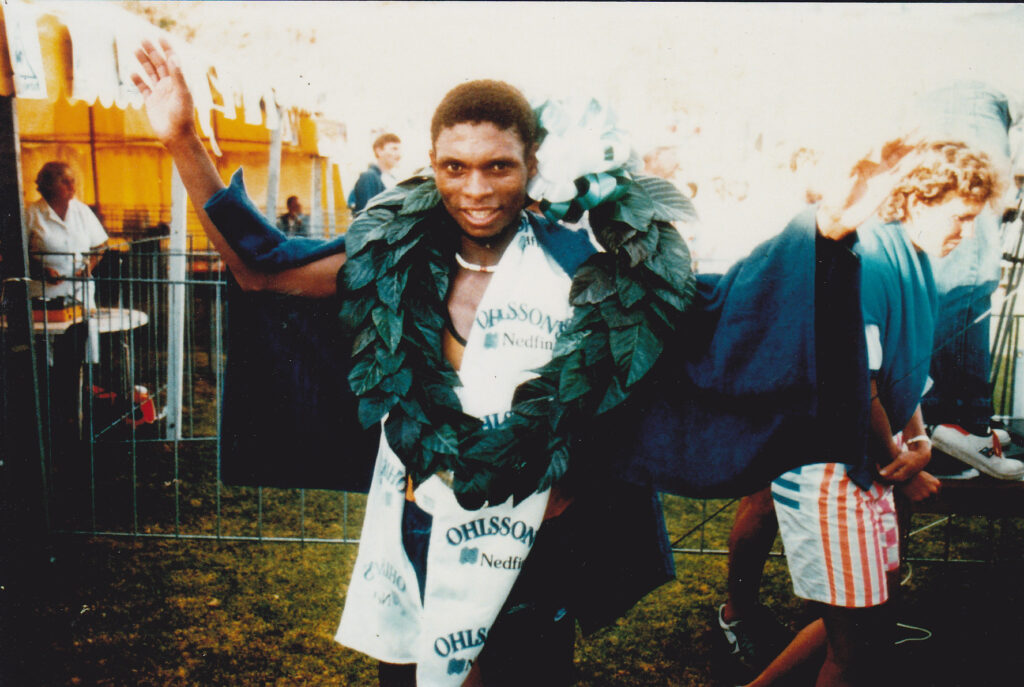 He also won himself a new Volkswagen Jetta for his record-breaking run! Magawana won the SA Marathon title in 1980 and posted 18 sub-2:20 marathons in his career.

He finished third in the 1992 Two Oceans Marathon, and 15th in that year’s Comrades Marathon, but by the following year it was already clear that his health was declining. He passed away in 1995 from pneumonia, aged just 36.

Willie Mtolo is rightly considered one of the all-time greats of South African road running. He was runner-up in the South African Marathon Championship three years in a row from 1985 to 1987, including the famous 2:08 duel in 1986 with Zithulele Sinqe. In 1988 he finally claimed the national title, with a new SA record, and then retained the title in 1989.

He ran the Comrades Marathon for the first time in 1983, aged just 19, and finished 23rd, but then focused on standard marathons for several years. In 1989 he finished second in his return to the Comrades marathon and, more notably, went on to win the Two Oceans Marathon in 1990. 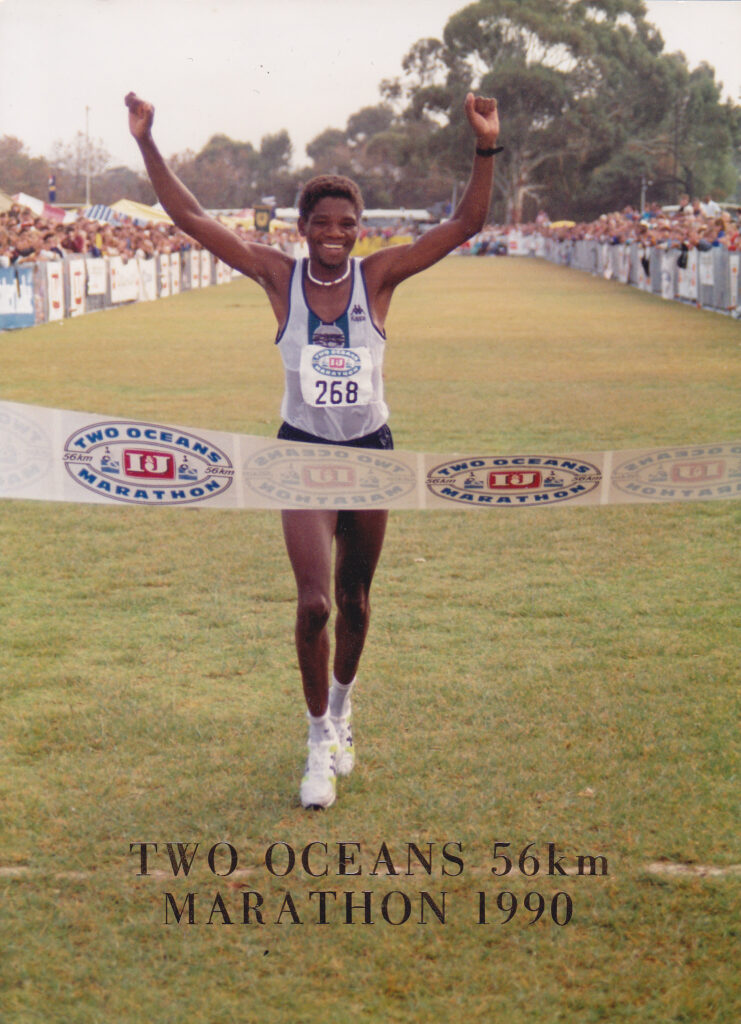 After this, he decided to go back to the marathon. It turned out to be the right move – in 1992, he won first the Enschede Marathon in the Netherlands, and then went on to claim the New York marathon title later in that same year.

His next outing in the Two Oceans Marathon was only in 2002, 12 years after his win. Incredibly, he still managed third place!

The late Zithulele Sinqe is one of the all-time greatest distance runners produced by South Africa. In a career of many highlights, the standout result was winning the South African Marathon Championship in 1986 in 2:08:04, which at the time was the fourth-fastest time ever run in the world.

He retained the national title in 1987, and that same year narrowly finished second to Matthews Temane in the South African Half Marathon Championship, when they both clocked 1:02:08 − then the fastest time ever run for 21.1km. Having represented South Africa in the 1992 Olympic Marathon, he moved up to ultra-marathons. 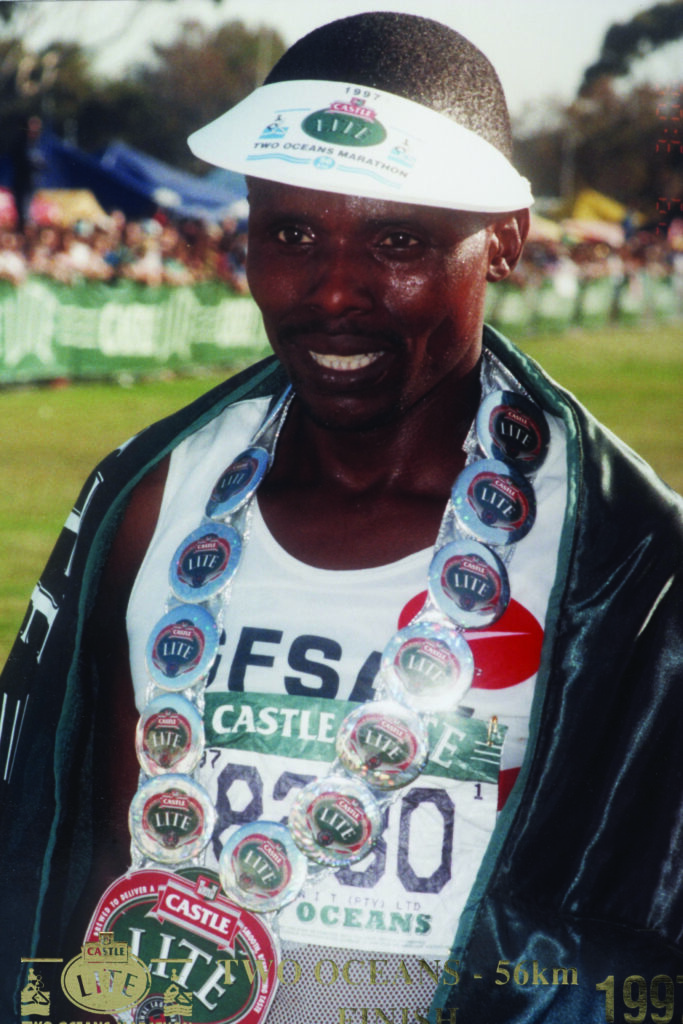 He also took fourth place in the 1997 Comrades Marathon. Later he became a highly respected TV commentator but was tragically killed in a car accident in 2012.

Only two men have managed to win the Two Oceans Marathon three times, Siphiwe Gqele and Marko Mambo. The tall Zimbabwean won the race in his debut outing in 2004, adding two more titles in 2005 and 2008. 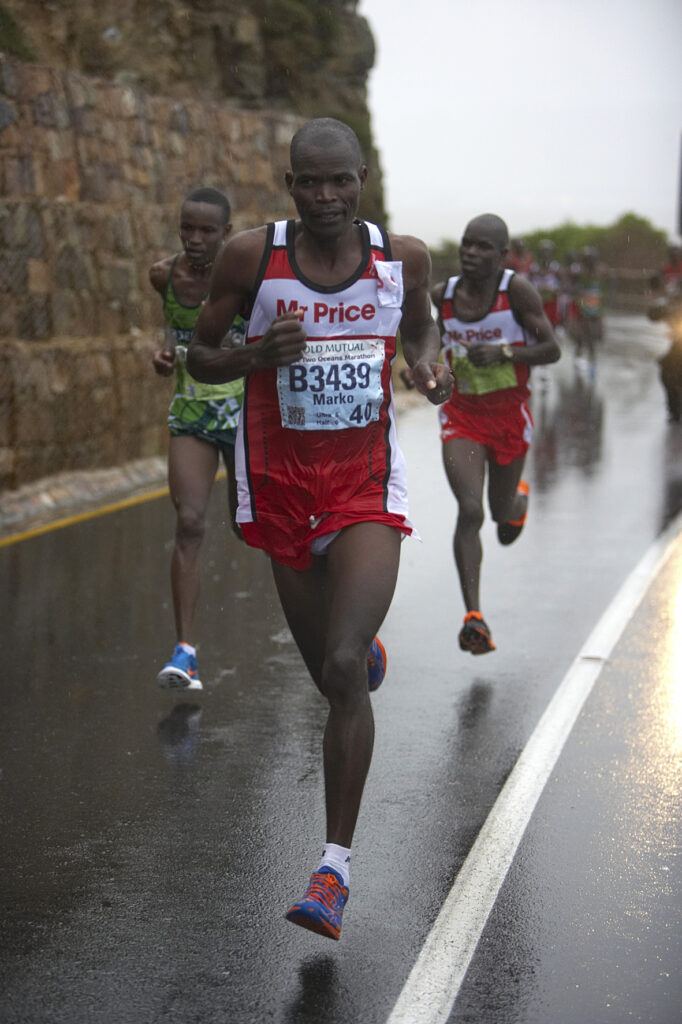 In 2009 he finished second, missing out on a fourth title by the narrowest of margins to John Wachira.

Mambo continues to enjoy success in South African races. In previous years he finished on the podium in the City to City 50km and Loskop 50km ultra-marathons, as well as several standard marathons, and as recently as 2018 he added a second Comrades Marathon gold medal to his collection.

Zimbabwean Stephen Muzhingi is one of just three men ever to win both the Two Oceans Marathon and the Comrades Marathon.

He won the Comrades three consecutive times from 2009 to 2011, then added the coveted Two Oceans Marathon title in 2012. 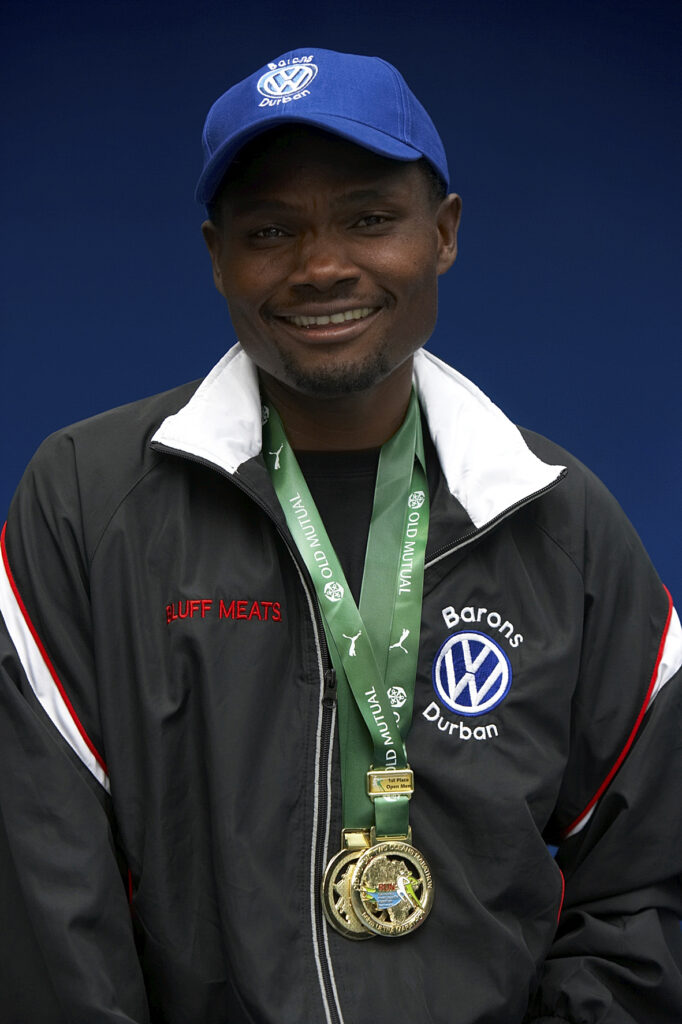 In an incredibly successful ultra-marathon career, he earned a total of seven gold medals at the Two Oceans, and became one of the most recognised runners in South Africa.

Where to find the TOM Book

The TOM 50th Anniversary Book, Celebrating 50 Years of the Two Oceans Marathon is currently available in Exclusive Books and is being delivered via Uber Eats. You will also earn Fanatics Points from Exclusive Books for your purchase. You can also purchase the book from takealot.com and Loot as well as publisher.co.za.

Good news for overseas readers who have been asking, the book is available on Books Direct. If you don’t see the book displaying or need an international postage quote, email admin@booksdirect.co.za