#OMTOM2018 Ultra Marathon participant, Luu Roegiers from Belgium, ran the race of his life on 31 March 2018. Literally. After a devastating cancer diagnosis at the end of 2016, Luu decided to fight back and turn his dream of running the OMTOM into a reality…

One year ago, I was sick to death. Last week, I ran the OMTOM Ultra. 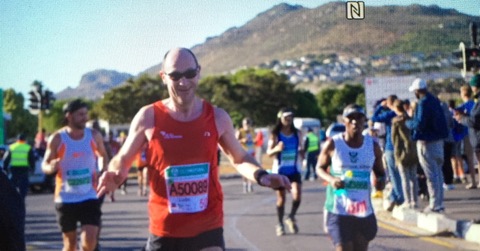 If one person can gain courage out of my story, then I have been successful…

On 18 September 2016, I participated in and finished the Cape Town Marathon. Three months later I was diagnosed with aggressive rectal cancer, with a tumour as big as an egg. I went from being on top of the world to falling to the bottom of my life.

Six months before my diagnosis, I experienced problems while running the Vienna City Marathon. Of course you think, “it’s nothing. It’s probably just a case of the running trots, or I drank too much of my recovery drink, or my body is just reacting to the stress.“ But then I realised that this was a real problem… To make a long story short: after a few surgical procedures I was able to start running again, under supervision of Prof. Dr. Woltuis.

Marathoners never give up, so instead of sitting in the corner crying like a baby, I decided to fight back against my cancer. There were many ups and downs, and in one weak moment I almost said, “Stop, I’m finished, it’s over, I give up…”

But gradually, I became more powerful. I took (and still take) medicine, but I continue to get stronger each day.

Before my cancer I ran 3,000 km a year. The Old Mutual Two Oceans Marathon was on my bucket list, but this goal suddenly became more urgent. So I promised myself that if I was still alive by the end of 2017, I would run the OMTOM in 2018. Because, to be honest, I didn’t know how much time I still had and one year later might be too late.

Running the Ultra was a way to prove to myself that there is still a future after getting cancer. Running is my therapy.

Training was not easy; it was my biggest challenge. During my training runs my body would sometimes tell me to stop running. But my friends, my family and running friends brought me to a higher level. While I had the mental strength, I didn’t know whether I would be able to finish the race. However, finishing was important for me. This was a game against cancer, and I had to win.

I did it! I finished the OMTOM Ultra in 5:49! Mission accomplished! 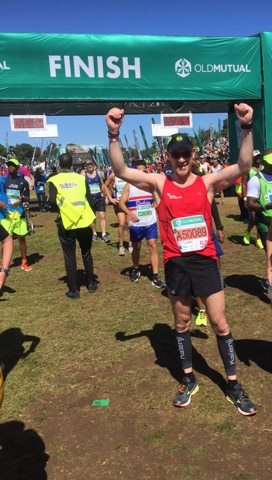 If you are struggling in any way, take courage from my story. Don’t give up. Don’t stop fighting.