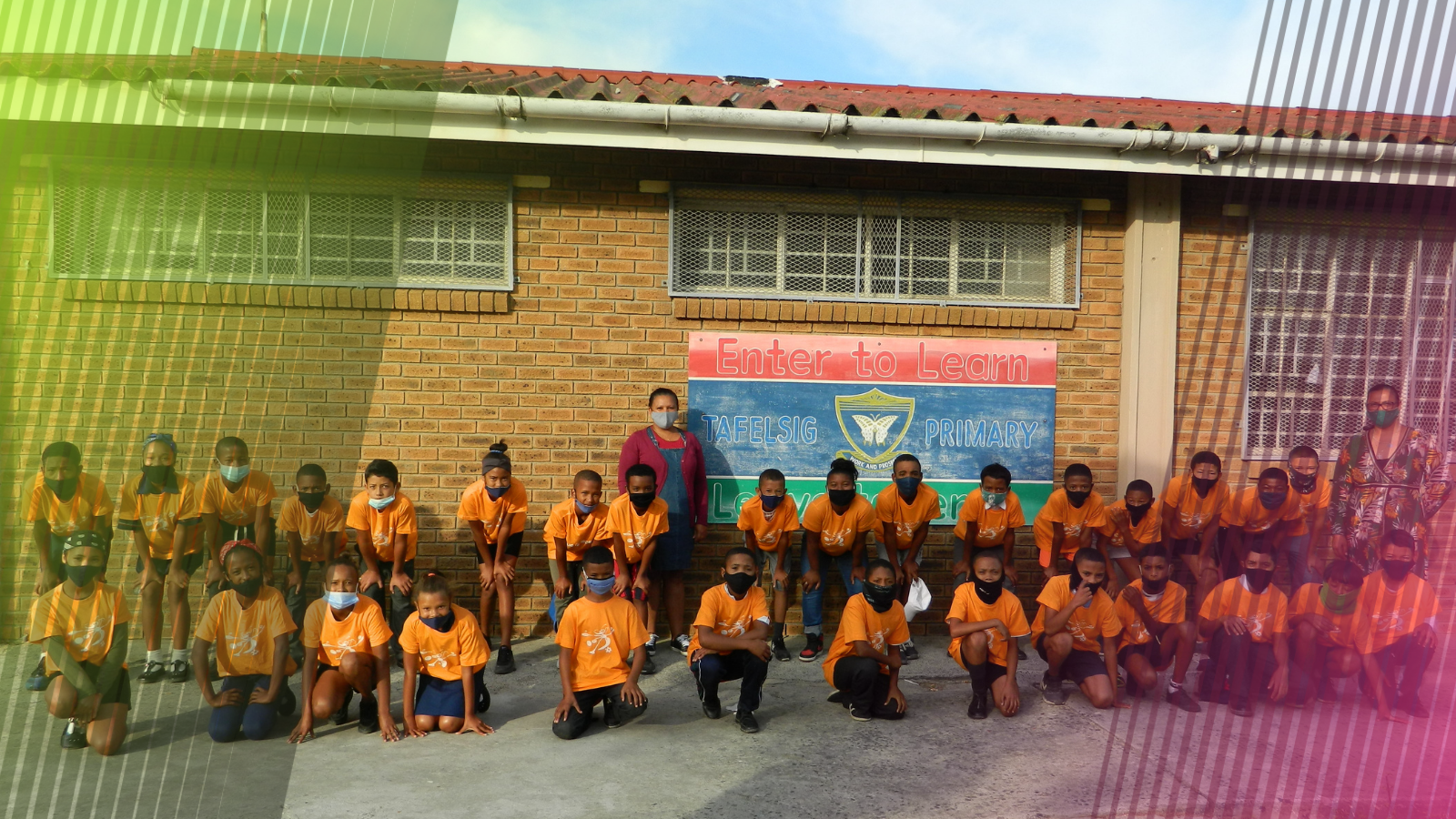 Thirty little heroes are running the Two Oceans Marathon Virtual Charity Challenge to upgrade their school sportsground amidst gangsterism and gun fights – and are literally fighting for a better future.

Tafelsig Primary School, Olifantshoek Street, Tafelsig in Mitchell’s Plain – 23 April was meant to be a day to remember for the 30 learners, their teacher, Jacqueline Bougardt, and acting principal, Mrs Marie Bruintjies, who were going to run the TOM 2021 Virtual Charity Challenge to raise funds to upgrade their sports grounds. Being mostly a mixture of sand and gravel, the sports ground is virtually unusable – and these learners had decided to do something to change matters themselves. ‘We currently do not have a useable sports ground for our learners to enjoy sports activities. This project is a priority as our learners need the space to practice for athletics and cross-country,’ explains Jacqueline.

Since the learners at this no-fee school learnt they’d been entered into the TOM Virtual thanks to the generosity of Jacqueline, their principal and other anonymous donors, the young athletes had been put through their paces and practising with aplomb. The community newspapers were ready to witness their feat and take pictures.

A 5,6km ‘track’ had been marked out on the grounds where the young stars practised their laps, most on hungry stomachs. ‘Our learners are remarkably resilient. The area is rife with unemployment and notoriously known as a gangster stronghold, and drug-dealing and in-fighting is common. The learners literally risk their lives to come to school some days,’ says Jacqueline.

‘They hunger for a brighter future. This school sports ground project is paramount so we can continue to focus the learners on sports, especially after school, instead of them hanging around on these dangerous street corners’.

Gang violence spills over onto the school premises

Then, in a devastating turn of events, the TOM office was informed on 22 April that the event was suddenly ‘unlikely’ to go ahead on April 23. Then, journalists involved were called, and advised not to travel to the school.

The situation was severe: in the week leading up to the TOM Virtual, gang war had broken out, breaching the school gates. In an effort to protect themselves, learners too were drawn into the fights, gun shots were fired and there were fatalities outside the school grounds.

Many parents had been forced to keep their children at home. The area is poverty stricken to begin with, and gang warfare only makes matters worse. As Jacqueline explains, ‘We have a number of learners who rely on the school for their sole meal of the day.’

Learners receive all their stationery, textbooks and notebooks from the school. ‘As teachers, we cover the books as the parents cannot afford plastic or sellotape,’ she adds. Frank Steyn from the Run4Schools Foundation, a key TOMI partner, makes sure that the most affected learners receive school shoes.

The little heroes have since been in touch with Jacqueline and informed her of their desire to run the TOM Virtual the moment it is safe enough to do so: ‘Our academic record is not the best, but the learners enjoy participating in sports. It takes their minds off the violence and adds structure and discipline to their lives. We are really looking to do our best so our sports grounds can be upgraded – once we have a usable field, we can prepare the learners so much better for various sports codes’.

Go here if you’d like to get behind the 30 little heroes on BackaBuddy: www.backabuddy.co.za/champion/project/sportsground-fundraiser

The 30 little heroes from Tafelsig Primary are: