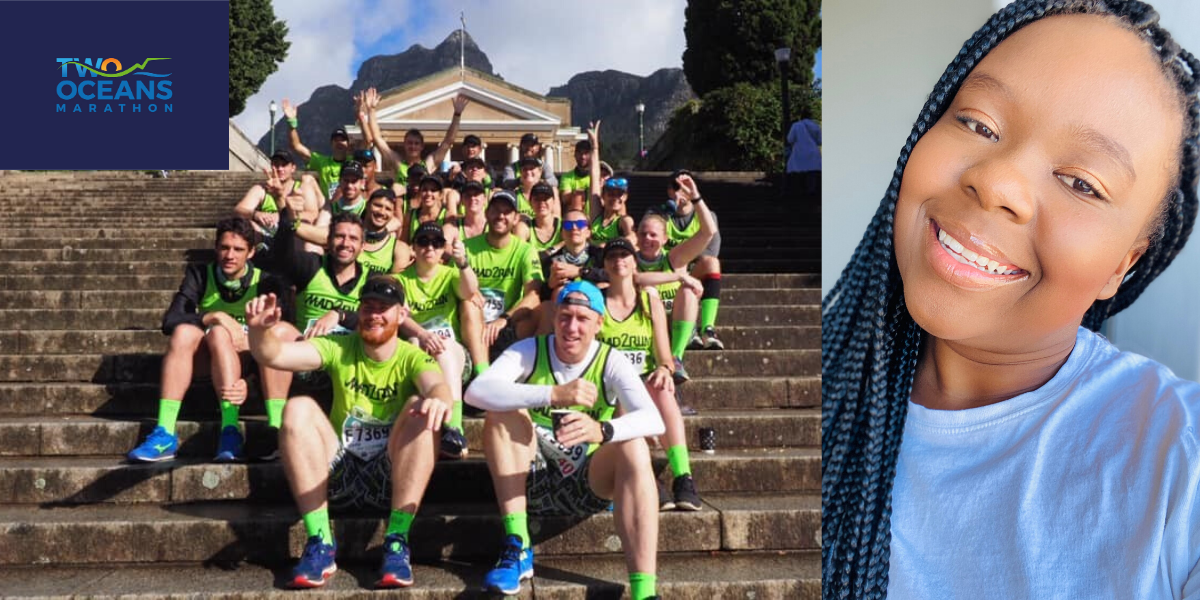 #HisLegacyLives: Running to empower one scholar at a time – the MAD Leadership Foundation

For the second consecutive year, the Make a Difference (MAD) Leadership Foundation put their feet behind their philanthropic philosophy when their MAD2RUN team achieved top spot on the Two Oceans Marathon Initiative (TOMI) philanthropy fundraising leaderboard. While every ‘run for charity’ endeavor, big or small, is the work of champions and there is no race to be king of the class, ‘top spot’ was a fitting TOM 2020 fundraising end to an organisation committed to creating the leaders, innovators, entrepreneurs and human think tanks of tomorrow with their first-class scholarship programme. 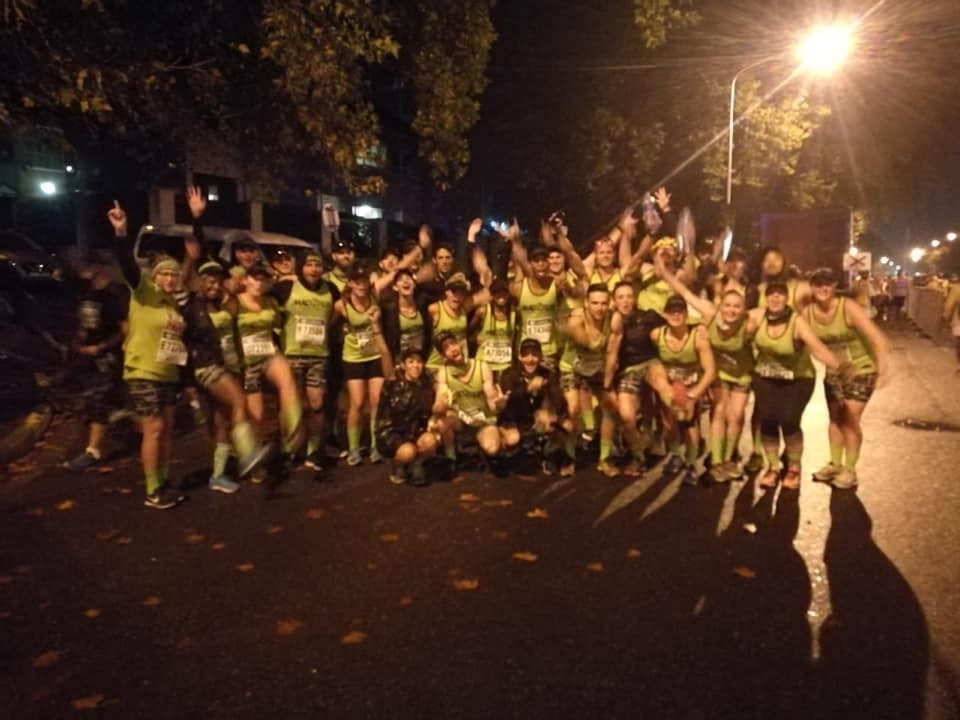 Scholars from under-resourced communities and schools receive this academic intervention from MAD either by applying themselves, or having their school, teacher or headmaster apply on their behalf. ‘The scholarship runs from Grade 8 right through to the end of tertiary education. After all, “Education is the most powerful weapon you can use to change the world” as our former president, Nelson Mandela said,’ enthuses MAD CEO Dayle Raaff.

Learners are eligible if they have attained an academic average of 65% in their current grade at high school. ‘The emphasis is on a comprehensive and forward-looking, integrated educational development which enriches not only the mind, but the whole person. While most students are on a university mid-term break, our scholars participate in forums and workshops that hopefully stimulate the breadth and scope of their horizons in general, and encourage them to explore extra skill-sets’.

Where it all started – the ‘DOT’ philosophy

In 2012 founder Shaun Raaff had a life-changing epiphany when watching an inspirational talk by fellow South African philanthropist, Braam Malherbe, who ran the Great Wall of China in aid of the charity Miles for Smiles. Braam’s main message was ‘DOT’, an acronym for Do One Thing. He believed in the compound impact of individuals doing one thing, or moving in one direction in aid of a common cause.

Armed with DOT, inspired by Madiba, and spurred on by his love of running to make a difference in his country, Shaun knew that his ‘one thing’ was helping the pace of educational advancement, especially for underprivileged learners. And so, what started with a team of 12 friends willing to run across the country in a 24-hour relay in one week from Johannesburg to Cape Town, has now become an annual, bigger group of SA runners using their feet to achieve a great feat!

‘Two Oceans Marathon is the final leg of the cross-country run, and a victory lap of sorts’

In 2020, MAD2RUN had grown to a core team of 42 runners, each doing their bit to cover the 1 500 km cross-country, fundraising run. ‘Each runner is responsible for fundraising, so we’re able to induct around 30 new runners each year to this MAD family’ explains Dayle. 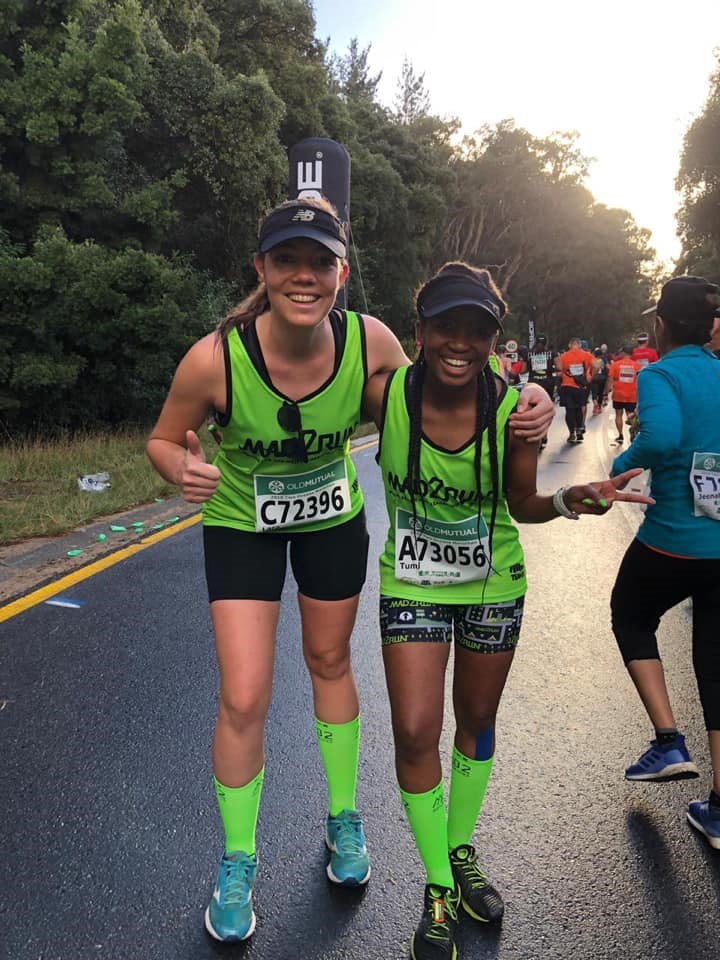 Changing South Africa, one scholar at a time

‘It’s great to finish at the top, but no – that isn’t really first on the agenda,’ Dayle says. Our goal is to uplift individuals through education, supporting them with passion, drive and boundless leadership potential. MAD2RUN is part of the fundraising effort towards this – the actual agenda. We hope that our scholastic beneficiaries can internalise this example of selflessness by our runners, and in turn go on to help those around them’.

Are there any criteria for joining the MAD2RUN team? Dayle says, ‘Anyone who has a desire to run to make a difference is welcome!’ In the mix are ultra marathon finishers to those who have only a few Park Runs under their belt. Each runner is required to run a minimum of 20 km per day. 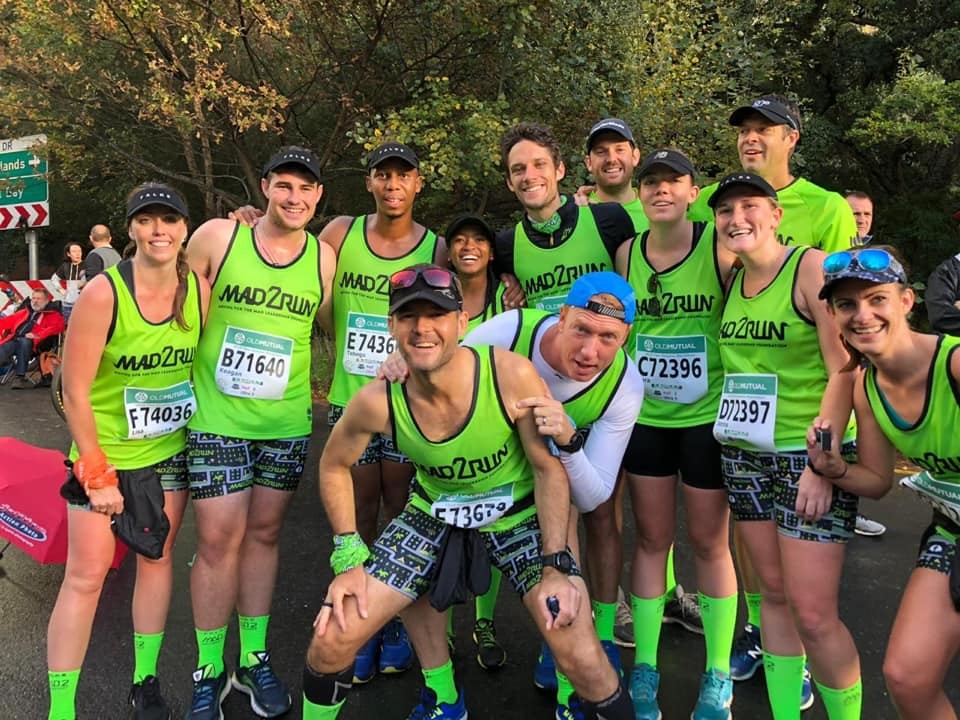 Reshaping the leadership landscape with scholarships to the value of R4 300 000 so far!

MAD’s philosophy is to change South Africa for the better, one scholar at a time. ‘We believe in the education effect – how it can have far-reaching and long-lasting implications on our country,’ says Dayle.

One such scholar and recipient is Cassie Mnisi (22) from Acornhoek (below). 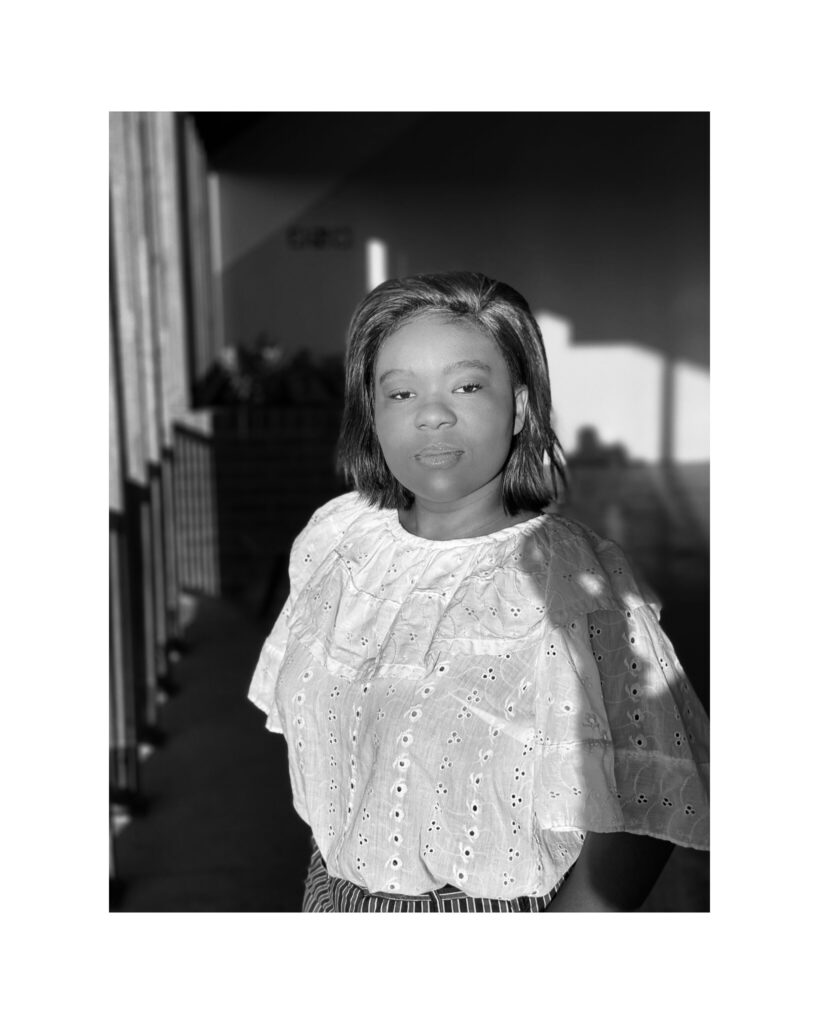 Now a top honours student in Strategic Communications at the University of Johannesburg, Cassie was picked to join the MAD Leadership Foundation in Grade 10, in 2014.

So outstanding has Cassie’s academic progress been, that she is a member of the Golden Key International Honor Society.

In a delightful confluence of destiny, Dayle, Cassie’s MAD mentor, also happened to be her first-year lecturer, saying, ‘She continues to live up to and exceed her potential. Each year she ranks among the top achievers at university overall, with an abundance of energy for so many other projects she’d like to tackle as well’.

She is also already a formidable entrepreneur, having marketed her wig and hair products business, Epicassa Beauty, through social media. It seems this is only the beginning – Cassie has big and unselfish dreams for her future, and for the kind of society she’d like to shape. It’s a direct testimony to what Dayle emphasises is the kind of ‘comprehensive’ education they strive for at MAD.

‘As an aspiring social entrepreneur and humanitarian, I intend to solve people’s problems within the rural communities’ – Cassie Mnisi, MAD scholar and Golden Key global inductee

In a not to the abundance of energy of all Cassie’s projects, she says: ‘I recently founded an initiative called Grad-Sphere. It’s a platform to help students to be career prepared and ready after obtaining their qualification. When I started this community space on LinkedIn, my aim was to support students/graduates to use LinkedIn effectively so they can attract better career opportunities as well as sparking interest in being intentional about life after university.

‘I never want to stop learning’ 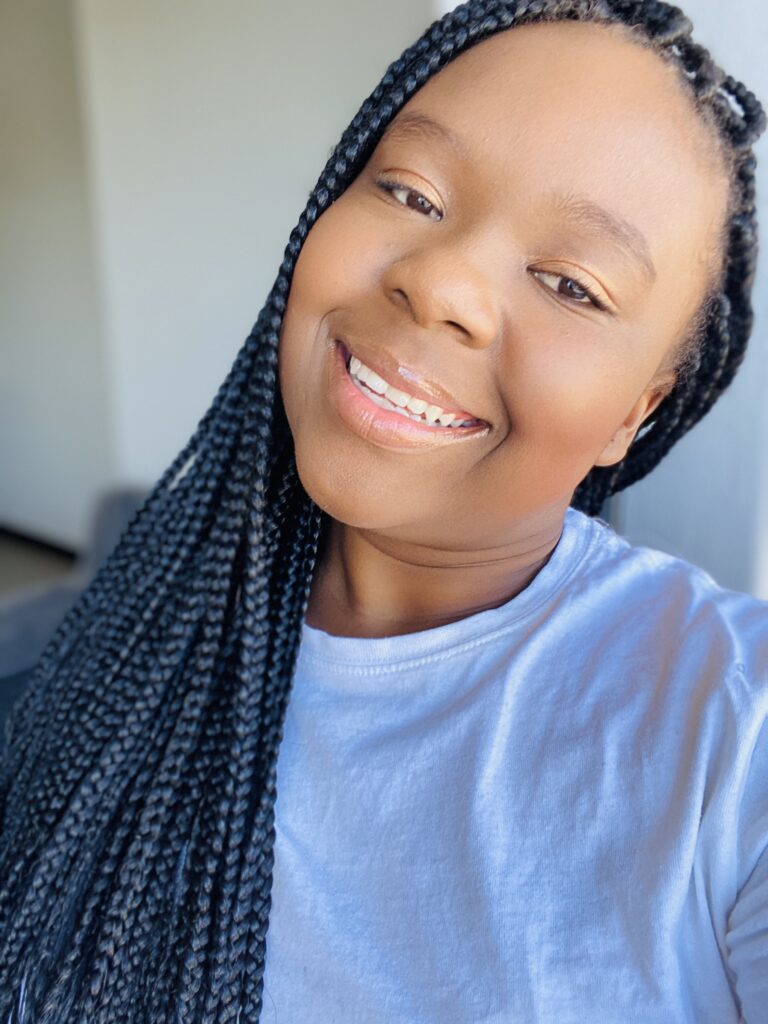 ‘I never want to stop learning. While I’m passionate about being strategic communications and marketing, and want to be a disruptor in this space in future, I also aspire to be a game changer in other ways.

‘In a few years, I want to help in the area of Corporate Social Responsiveness and Responsibility. As an aspiring social entrepreneur and humanitarian, I intend to solve people’s problems within the rural communities.

‘The issue of unemployment really troubles me. I hope to collaborate with other passionate serial and social entrepreneurs in order to serve our people through effective empowerment that perpetuates a cycle of producing more entrepreneurs, who employ more people in their communities.

‘It’s important to stop the narrow focus on companies creating jobs, and to move to individuals creating work for themselves, especially from the comfort of their own homes – this is something the current pandemic is forcing us to focus on right now, in fact.

It’s clear Cassie has an understanding beyond her years and is the kind of future leader we as a country can bank on. ‘I don’t know what I’ll get to achieving first, but thanks to the scholastic opportunity from MAD and the ever-relevant legacy of Tata Madiba, I, too, want to leave a legacy that matters; a legacy in people’s hearts by the time I pass on’.