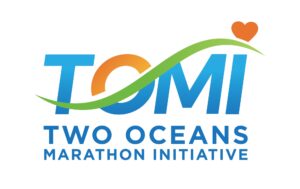 As always, runners have the option of donating to TOMI when entering every TTOM Ultra and Half Marathon event.

As a runner, you also have the option of buying a charity entry. These can be purchased directly from any of our official charity partners, who will be announced once TTOM 2023 has opened.

By the end of TTOM 2022, R103 000 was donated directly to  TOMI thanks to the generosity of Two Oceans Marathon runners. Charitable organisations were invited to apply for funding after the event and after a rigorous selection process, several community-based organisations doing social outreach work aligned to each pillar above, were chosen as beneficiaries who would receive funding.

Fundraise for any cause with GivenGain

To get started with your fundraising project for the benefit of one of our official charities for #TTOM2023, select your event and preferred charity project* (which can also be your own*), and click on “Fundraise & Donate”. Create your project and when done, share it with your friends and family for donations!

HOW TO FUNDRAISE ON GIVENGAIN IN 30 SECONDS

*Got a question or need to have your charity registered on GivenGain? Get in touch at fundraising@givengain.com

*Want to fundraise or register your charity or cause with BackaBuddy? Contact sardiqah@backabuddy.co.za

In 2019, the Two Oceans Marathon, through the Two Oceans Marathon Initiative (TOMI), became the first running event in South Africa to raise more than R1 million on the GivenGain platform. A total of R1 035 302,00 was raised, to be precise. Thank you to our TOMI runners, supporters and donors for your passion and generosity!

TTOM 2023 Official Charities - here's where to get your hands on a #TTOM2023 charity entry!

Every year, a number of entries are made available under our social impact arm, TOMI, to benefit various charities. The TTOM 2023 application period for registered charities to apply for entries will close on 11 November 2022.

Two Oceans Marathon is so much more than 'just' a marathon! The Two Oceans Marathon Initiative (TOMI), is dedicated to making a positive difference in the areas of education, environmental sustainability, health and wellness, and athletics development.