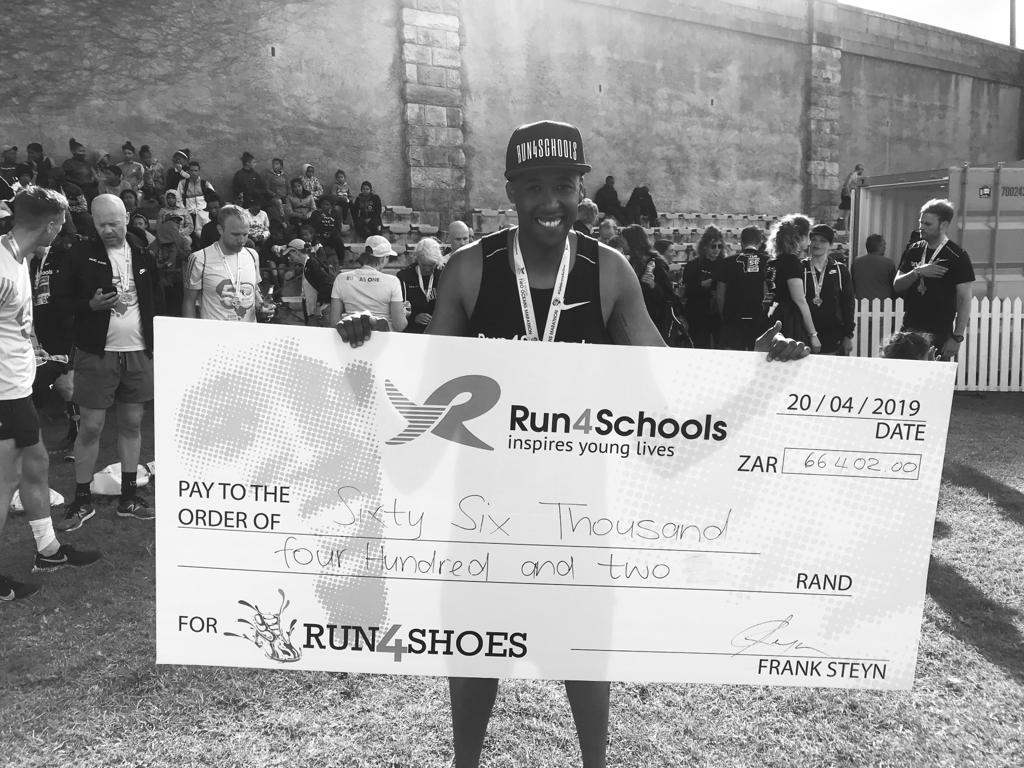 Are you a supplier? Can you enter into a bulk school shoe sale with Frank Steyn, who has raised R66 000 to purchase school shoes? Contact media@twooceansmarathon.org.za

His feet recovered a week afterwards, and he even went on to run the Safari Half Marathon under two weeks later. How on earth did he do it? That’s the question those who knew he was going to run in school shoes asked the SA Sports Manager of Amsterdam-based Run4Schools, Frank Steyn, when they heard he’d be tackling the Two Oceans Ultra Marathon in anything but trainers. ‘Runners along the route were asking me the same thing, with some fearing I would not make it. I appreciated the concern but I thought of the kids from the schools we work with who were waiting to cheer me further down and see me cross the line, and giving up was not an option,’ smiles Frank when we catch up with him at our offices.

So why did Frank run in school shoes? It was part of his TOM GivenGain* fundraising campaign in aid of buying as many pairs of school shoes as possible for learners on the Cape Flats who need them. Frank is hoping to have these shoes to distribute soon after the start of the third school term on July 9, when the Cape winter is harshest.

‘The race was amazing. Putting my feet on the line was a privilege – after all, I had shoes. For some kids on the Cape Flats in places such as Mitchells Plain, Langa, Bonteheuwel and Khayelitsha, school shoes are a luxury. Go to any school in these areas and you will find learners in the dead of winter with nothing on their feet at all,’ he adds.

‘I lost a toenail on my small toe – luckily, I didn’t feel it. The downhill on Ou Kaapse Weg though was sore; very sore! And that was despite all the support on that stretch, so you can just imagine,’ chuckles Frank. ‘At no point did I entertain not finishing. When I saw my family and friends on the finish straights, I became emotional’.

‘I’d had to hold it together mentally because your mind plays tricks on you. My mind said to me, “Your feet are bleeding by now”. But in reality, there were just a few cuts’.

Trying to catch the bus

So, were there moments of panic? Frank admits there were. ‘I lost the 6:40 bus on Ou Kaapse Weg. Then a runner from Ommiedraai Friends AC stayed with me to get me to Southern Cross, but he had to move on. By now, the 7:10 bus came along. I lost them too! When the 7:30 bus came along I knew it was do or die. My blisters were bothering me badly, but the thought of not finishing was killing me way more’.

As it turns out, Frank needn’t have worried. He finished with 14 minutes to spare, in a time of 7:16.

You may not have been in his shoes, but you can still put your best foot forward by helping Frank. If you’re able to, drop off school shoes at our offices and we will get it to Frank.

*You can start fundraising for TOM 2020 right away via GivenGain for your club, or any charity or cause of your choice. For more info, go here or email fundraising@givengain.com or tomi@twooceansmarathon.org.za