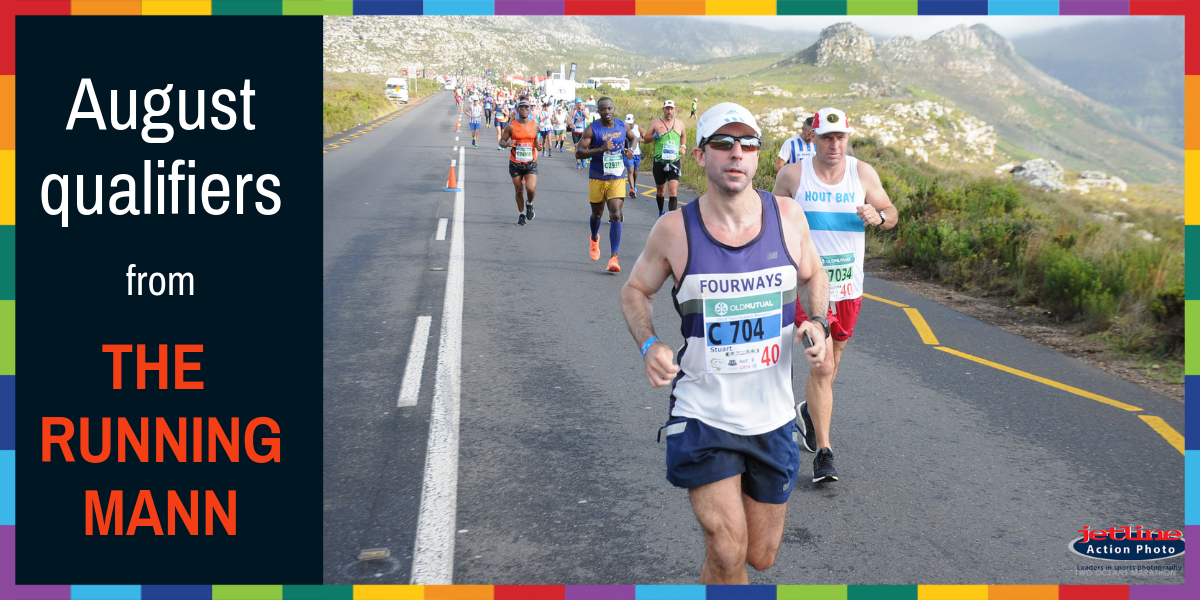 Kicked off your qualifying for TOM 2020 yet?

Where can you qualify this month, what’s the distance and what kind of marathon course can you expect? Each month until qualifiers close (the date has not yet been set and you’ll be the first to know when it is), the Running Mann brings you a breakdown of where to run and why.

KwaZulu-Natal is where it’s at this August

After the long winter slumber, South Africa’s long-distance road-running scene awakens slowly with just six options, including one brand-new race, for the marathon connoisseur. Unless you’ve let your muscles go into atrophy, August is an ideal time to get an earlier Two Oceans Marathon qualifier done.

It’s bonanza time in KwaZulu-Natal who host half the races, including both ultras. If you’re in Gauteng or north of the Vaal though, you’ll have to make travel plans to get a qualifier done and dusted, as up-country marathon running remains in hibernation until September. 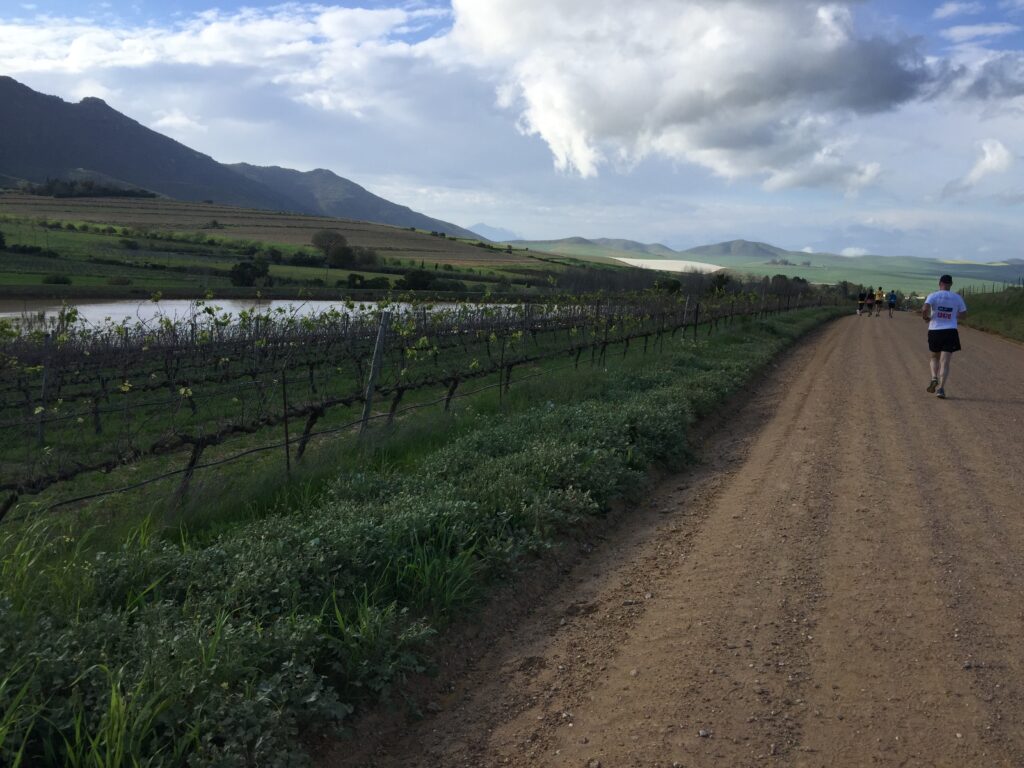 My pick of the marathons is the PPC Riebeek Bergmarathon (above). The race starts and finishes at the PPC Cement Factory in Riebeek West, just one hour’s drive from Cape Town. Expect a contrasting backdrop of Dickensian industrial machinery and pristine vineyards. Your marathon route allows you to ‘explore’ two of the oldest towns in the country, the local towns of Riebeek West and Riebeek Kasteel (below), as well as the exquisite Riebeek Valley in the Swartland. 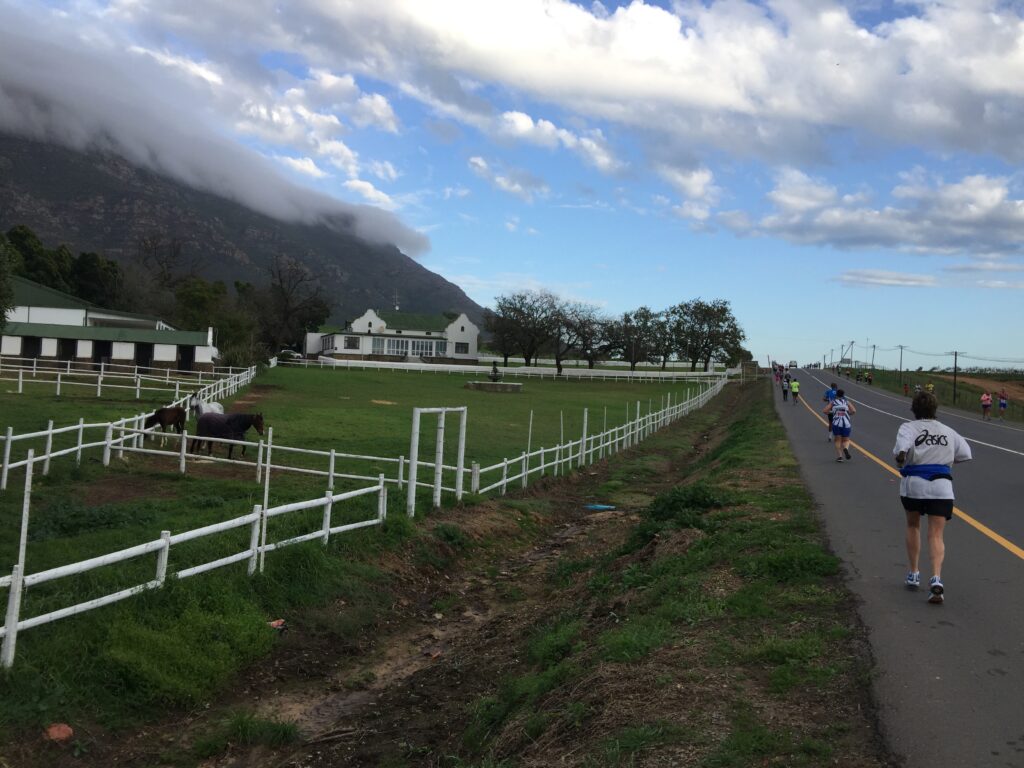 With ‘Berg’ in the title, you can expect a few massive climbs but the stunning scenery’s sure to distract you on the way up and the magnificent views from the top make the effort worthwhile. Like Chapman’s Peak and Constantia Nek, the route boasts two monster climbs – firstly up the Kasteelberg and then up the Porseleinberg and Bothmaskloofpas. Although there are no pristine oceans or beautiful beaches to gaze down upon, the wonderful vista of the Riebeek Valley from the top of the Bothmaskloofpas displays another aspect of Cape splendour which alone is worth the R150 entry fee.

This is also an ideal race for the romantic marathon runner. Make a weekend of it and take some time to sample the wines from the vineyards you run past, such as this one below, and to taste the olives and other local produce from South Africa’s breadbasket. As if that’s not enough, if you’ve still got room, there are plenty of great restaurants to make sure you don’t lose all of your winter fat too early in the season. 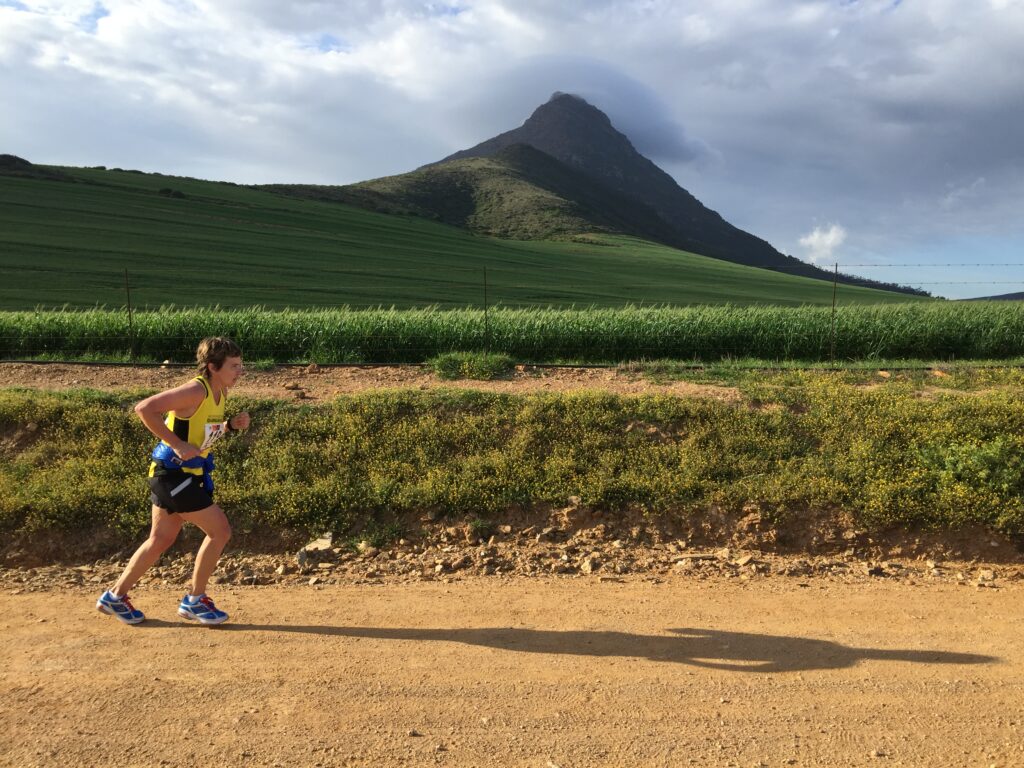 This is a marathon all ‘real’ runners will want to do at least once but be careful, this is an addictive event! I ran my first Bergmarathon in 2016 and will be back for my third trip this year – but Two Oceans Marathon Blue Number, Brackenfell runner Brian Rothman, has run all 33! Brian has ‘only’ done the World’s Most Beautiful Marathon 31 times so Riebeek Bergmarathon must have something special! 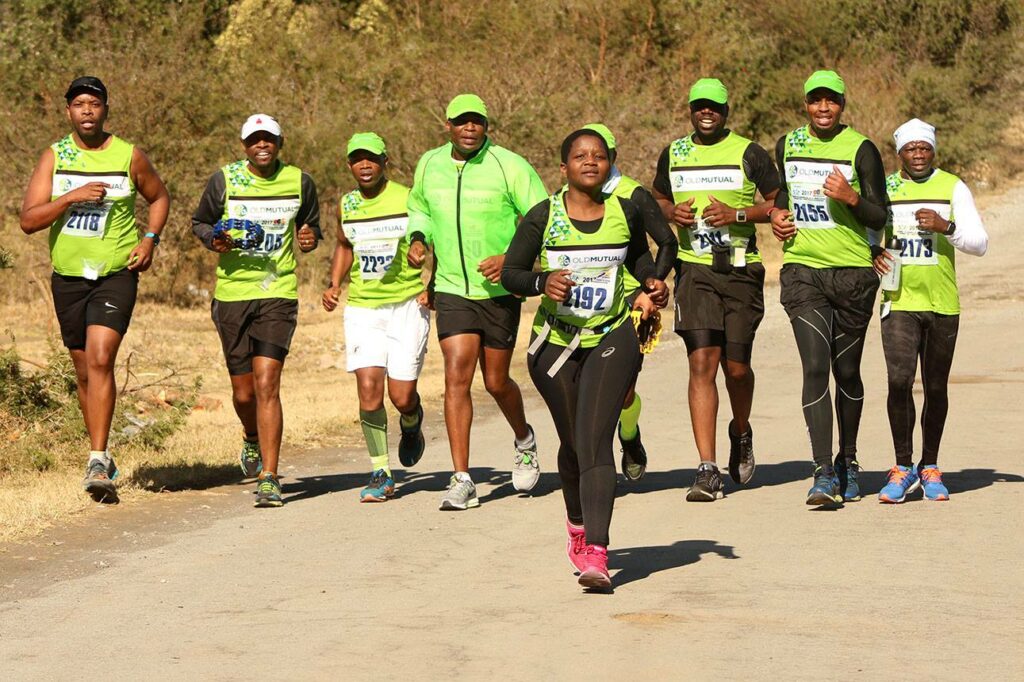 The second oldest standard marathon in the country, the Twizza Amathole Marathon, is held on the first weekend of August. This is a point-to-point marathon from Stutterheim to King William’s Town in the Eastern Cape. The route has a hilly first 24 kilometres after which you enjoy plenty of easy downhills (and a few undulations) to the finish line. Entries are just R130 and you can enter on race morning. 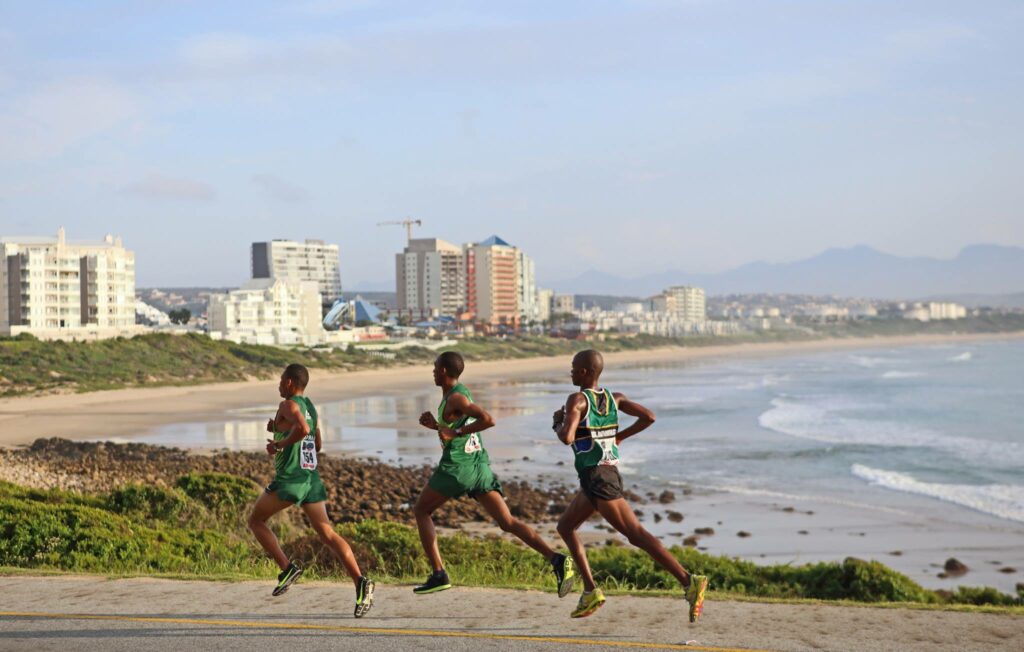 I’m looking forward to making a trip to the Garden Route to run my first PetroSA Marathon in Mossel Bay. I’m told that this is a lovely out-and-back route along the coastline where you’ll enjoy the constant companionship of the Indian Ocean and Outeniqua Mountains over the marathon distance. 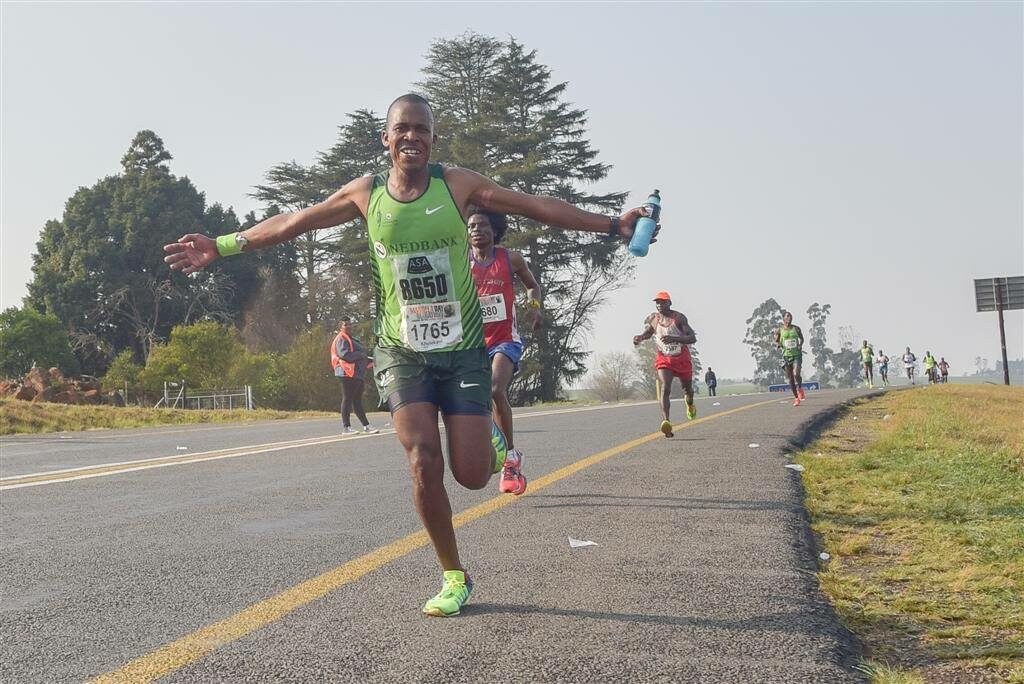 Your final standard marathon choice is by far the biggest marathon on offer in August, the Mandela Day Marathon. This is a tough, beautiful and meaningful marathon to celebrate the life of Nelson Mandela. The race starts at Manayi Hall in Imbali, Pietermaritzburg, the place where South Africa’s first democratically elected president and iconic global statesman Nelson Rholihlahla Mandela made his last public speech before incarceration on 25 March 1961. The finish is also of (sad) significance:  the Nelson Mandela Capture Site near Howick is where he was arrested on 5 August 1962.

The Mandela Day Marathon is perhaps the toughest marathon in the country – Nelson Mandela had a Long Walk to Freedom; this is one long, hard uphill climb all the way from Pietermaritzburg to Howick.

Both your ultra options are in the KwaZulu-Natal Battlefields area over the Women’s Day long weekend. 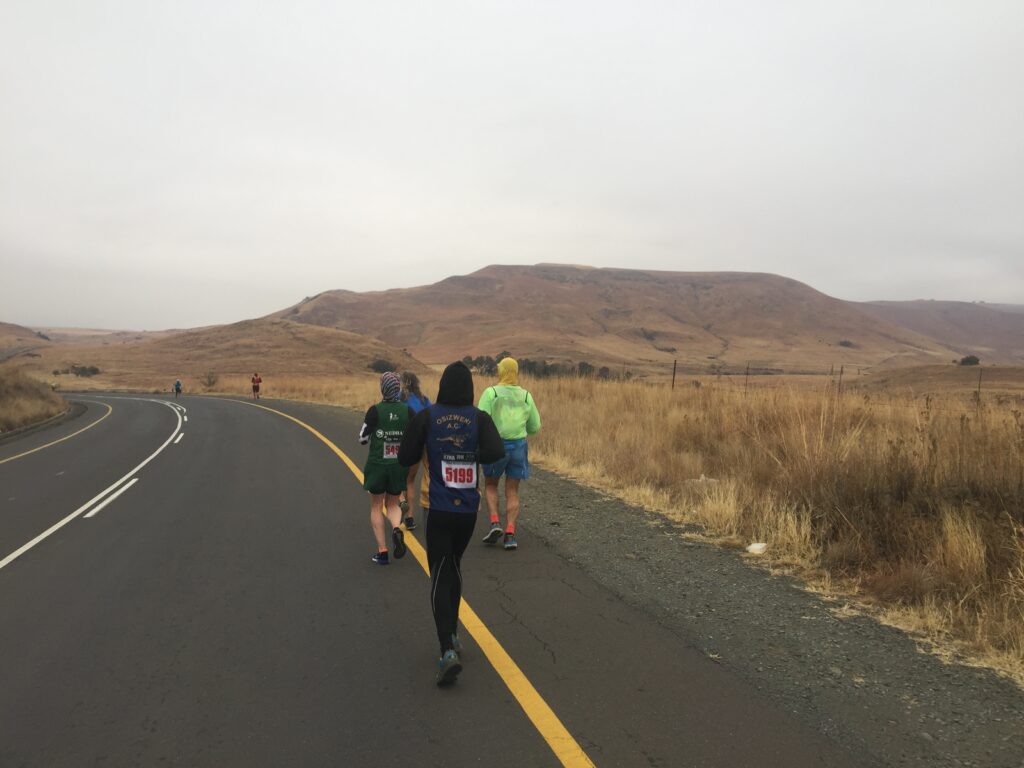 The first is the 25th edition of the 51.2km Memel Walk (yes – runners are welcome) from Memel, often the coldest town in the country, to Newcastle. The race has a great backstory, too: It started one night at band camp following a schoolboy dare, as in ‘I bet you couldn’t walk from Memel to Newcastle’ and has become an iconic event in the local community. Not as iconic as Africa’s biggest running event, but you get the picture. The race is run on Women’s Day and fittingly, the members of the fairer sex usually outnumber their male counterparts.

The Memel Walk provides breathtaking views once the fog lifts. Expect great support tables and generous small-town hospitality along the way. Although the race starts over 1 700m above sea level and finishes around 1 200m, there is by no means an ‘easy ultra’. There are plenty of climbs along the way – and you’ll warm up quickly from a sub-zero start in the Free State with a 17km climb to Botha’s Pass before dropping into KwaZulu-Natal, a pleasant and gentle downhill that reminds you of the Chapman’s Peak descent into Hout Bay. If you like to get ready early, the great news is that once you reach Newcastle, all you’ll need is a parkrun to make it 56km!

The new ultra ‘kid’ on the calendar is the 52km Prince Mangosuthu Ultra which is run point-to-point from Nqutu to Dundee, just down the road from Newcastle. The terrain is hilly and the area is cold at this time of the year, so expect some tough conditions. I am always up for a challenge and plan to pay them a visit to investigate!

There are some great options for those that are up for an August marathon and want to qualify early for Africa’s biggest running event. See you on the road!

The Running Mann, real name Stuart Mann, has completed over 200 marathons and ultras, and is on a mission to run every marathon in South Africa! Every month, he rounds up your best options for qualifying for his favourite ultra, Two Oceans Marathon. Follow his adventures as they unfold on Twitter, Instagram and Facebook