Home > Two Oceans News > News > Looking back, moving forward – the TOM Men’s Ultra contenders we’ll be keeping an eye on during the year 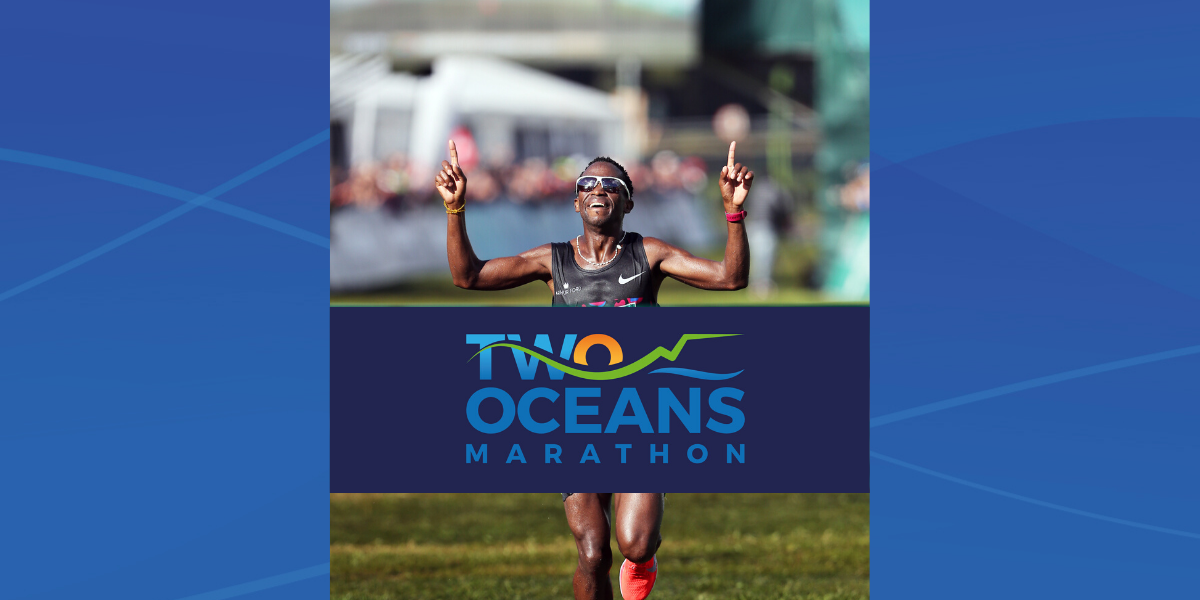 Looking back, moving forward – the TOM Men’s Ultra contenders we’ll be keeping an eye on during the year

Would we see the defending duo Bong’musa Mthembu and Gerda Steyn make all other athletes wait until 2021 to taste TOM Ultra victory? That was the question on everyone’s lips in the run up to TOM 2020.

While it may have been a bit of a smile and a dance – at least on the face of it − for the elegantly dominant Gerda Steyn, the chase for the Men’s title was filled with far more intrigue.

The Kenyans were out to destroy Magawana’s record in 2019 − in 2020, it’s fair to say they were in for Bong’musa’s blood

In 2019, it was all about whether Kenyans Justin Kempboi Cheshire and Abraham Kiprotich could break the long-standing record of Thompson Magawana (3:03.44). TOM 2020, on the other hand, was always going to be more of a race of revenge for the Kenyans, if they came in with the form they’d recorded in their pre-race training. They were looking to not only avenge a record opportunity missed, but to bite back at the man who had deprived them of line honours, Bong’musa Mthembu.

Justin and Abraham though, ran out of steam on the challenging 2019 Ou Kaapse Weg route. They had specifically trained for ‘Chappies’, and the Kenyans had not anticipated the jarring descent of Ou Kaapse Weg that came about due to the mandatory, last-minute route change.

Enter Bong’musa Mthembu and his mastery. When the Kenyans began to fade, he made sure to keep running a composed and measured race, reeling them in one by one. Sure enough, Bong’musa went on to bag his first Two Oceans Ultra Marathon title in four attempts. He was followed by former winner, David Gatebe.

Will TOM 2021 field another staggeringly strong field?
That was 2019. Perhaps 2020 would have been vastly different – the depth of the field was staggering:
• Bong’musa as the defending champion was back. Will he be back for 2021? For now, the defending champion, known for his tactical mastery, prefers to play it coy.
• David Gatebe is a hard-working athlete. Unless there’s a drastic turn, all odds are on him returning for 2021.
• Justin Kempboi Chesire, back.

All three have tasted victory. All three would have been closely watched, and for good reason.

Bong’musa, in his own words
‘Bongs’ knows what it takes to win. Hinting that his preparation was more than on track and if nothing goes wrong injury-wise, he’ll likely be back to defend his title in 2021, not just run the magnificent Two Oceans, he said: “Being the defending champion does come with pressure. Everyone will be watching you. But each time I step out, I know that I need to run my race and do what I do best on the day. If that is good enough for the win, that is great. If not – I can only do my best.”

Bong’musa, keenly aware of his status as defending champion, would clearly have loved nothing more than to repeat his feat from 2019. “It was not expected; the win in 2019. I just ran my own race. I was ecstatic. Winning the Two Oceans had always been a dream of mine,” said Bong’musa at the time.

As the defending champion, he knew there’d be the potential for a Kenyan ‘revenge race’ and that he was carrying the hopes of an adoring local fan base on his chiseled shoulders. “Of course I would have liked to win again. We don’t come to races to compete only. Yes, I would’ve liked to be competitive; and it was, as always, a deep field. It would have been special to win and defend my title,” Bong’musa reflects. 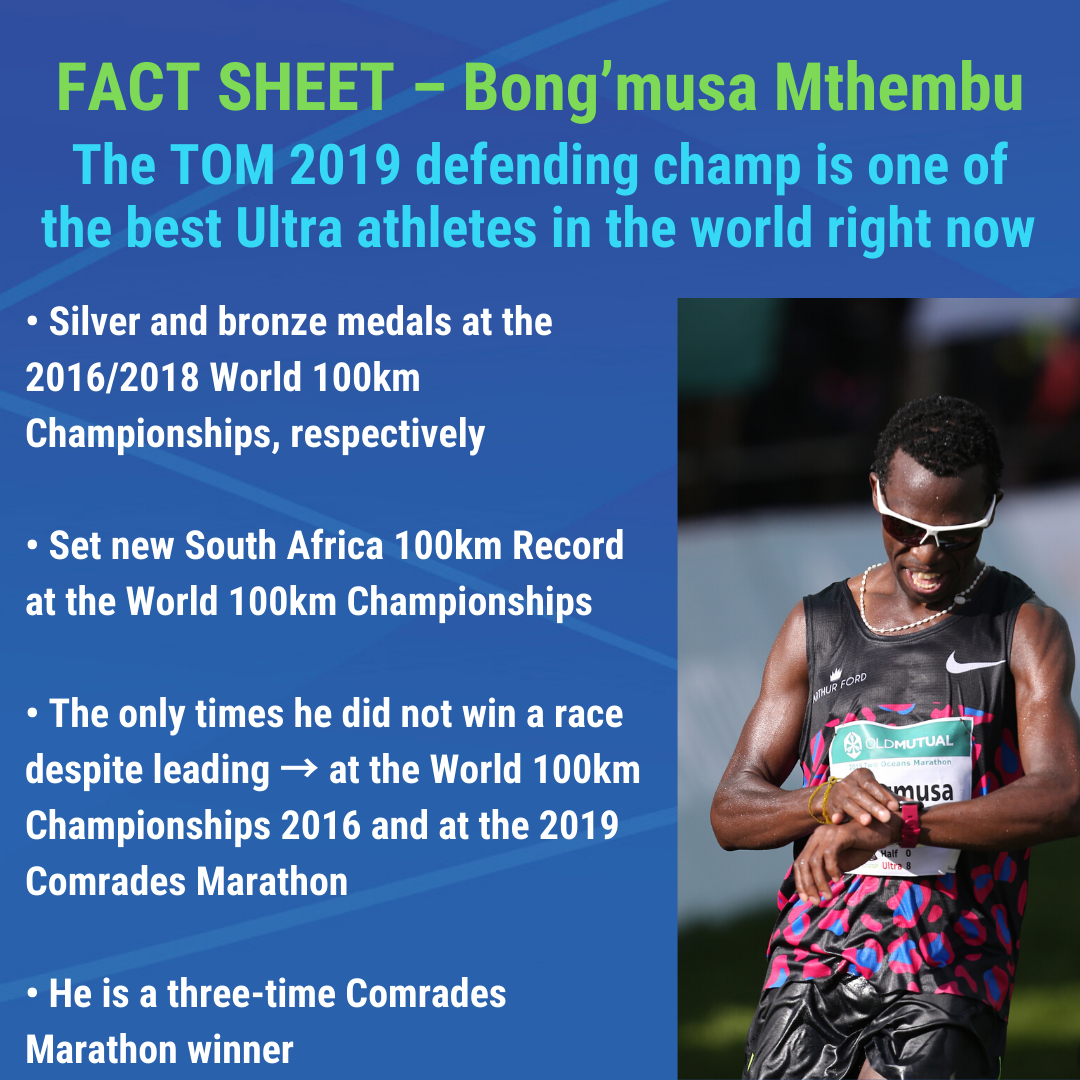 What can we expect from Bongs for the rest of the year, and in 2021?
A lot. When Bong’musa shaved nearly three minutes off his previous best, it marked an ominous warning to his rivals.

And, as we well know, when a strong-running Bongs makes a move to the front of a race, it’s generally a defining moment. Where these defining moments will take him in 2021? Well, maybe right to the very top.

The other contenders – Justin Cheshire, David Gatebe and Lungile Gongqua
Despite Bong’musa’s incredible form and recent credentials, the field was filled with danger, the obvious threat being Justin Cheshire.

With so many races being cancelled worldwide, one look into the metaphorical crystal ball spells even more snares come 2021. ‘New’ and out-of-form athletes may emerge from the shadows. On-form ones may be in even better form. The field is wide open.

David Gatebe
The 2013 Champion is always a threat in any race he enters. Blessed with blistering speed and endurance, David seems to have re-discovered his mojo since his Two Oceans Marathon win. In 2018 and 2019, he finished third and second respectively, and is the only runner to have won a National Marathon title, the Two Oceans Marathon as well as Comrades.

The Lesotho Trio
The Lesotho Challenge of Mabuthile Lebopo, Teboho Sello and Moeketsi Mosuhli were also back. Moeketsi has raced in the Two Oceans nine times and has only been out of the top ten on two occasions. Mabuthile, too, is a regular face in the top 10, as is Sello.

The list of contenders was almost too long. Looking forward – a gamble, but on paper it feels that the race may once again come down to the Bong’musa, Justin, David challenge.

Then again, 2020 has been anything but a predictable year worldwide. Races are not run on paper, so who knows what 2021 holds.